Home » Medically Related » My Commentaries » Other Items of Interest » War on Women In US Continues in Texas, Digital Illiteracy With Lawmakers the Contributing Factor For the Insanity With Continued Legislative “Carnival” Session Called During NBA Playoff Game…

This is not the first time I have said this and it makes sense.  It appears that when issues of complexities with lawmaking get beyond what they 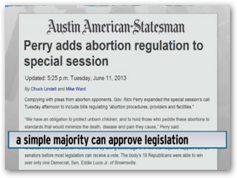 “choose” to deal with this is the end result.  MSNBC did a good job in covering the latest in Texas.  I mean you have to laugh to see the mad man screaming on the floor in Wisconsin over the debate on the floor over a proposed bill for voting about abortions.  I swear the rest of the world has to be laughing at us with all of this.  This is really sad to see this continued focus and all the time on the issue.  They all are starting to look like a bunch of men who appear to maybe suffer from manic depression.

When the states and country has bigger pressing 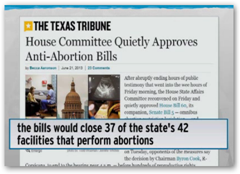 issues to deal with, we still are plagued with emotional shows and laws that attack women.  The Texas issue of what the legislature did, during the big basketball game, is mind boggling as they waited until during the big game to have a special session.  What’s the matter with these men?  Screaming and hollering to control abortion rights?  Again perhaps we are electing too many bi-polars to office?  I am really starting to believe that we do need to address mental illness and it starts at the top, with lawmakers from what I am seeing of late:)

Instead of intelligent conversations about infrastructure or something else that is important and pending, we get the “clown shows”…and after you watch the video see if you don’t come to the same conclusion as it’s hard not to.

When you see all the women who show up to testify during this special session during the middle of the NBA playoffs you can see how a citizen’s filibuster tried to add their input.  Again, as a logical tech person watching technology and analytics use in the world, especially in healthcare, I don’t see this as being one bit logical for these legislative antics on abortions.  This is beginning to look like a side show done “just because they can”…sad.  It’s a Carnival show that is hurting women all across the US as States take on the abortion issue and keep making this a priority.  We are already at the point to where it’s not even justified as a major factor to save any substantial money with budgets, so put that aside and what else is left. a Carnival show.  You may or may not like MSNBC but fact is they covered all of this when others did not and facts are facts no matter who reports it.

Again to sneak around and call a special session to attack women on abortion rights during the NBA playoff games when they thought all would be distracted is really a chicken act for sure, but the power of social networks brought a lot of constituents to the podium to testify.  These are just mean nasty digital illiterates that got elected to office and are scary.  The situation is not settled yet as who knows when the next special session will be called to continue the effort, maybe during the next basketball game?  Sunday afternoon appears to be the next session when the legislature meets again.  BD

Saturday, June 22, 2013
Medically Related , My Commentaries , Other Items of Interest