Time to lighten it up a bit, but Durex has found yet another way to market 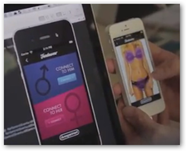 condoms it appears:)  Ok so how long before the technology finds some use in Health apps I wonder with strapping on some sensors for an exam to “see if it hurts here or there”.  .  Will they be wrapping up some kind of therapy using touch in a phone?  The article says the product is not out yet, but you can watch the video and see how it works.  Oh boy, bras and underwear with touch actuators and it all goes through an Amazon server.  Gives a new meaning to phone sex.  BD

The condom manufacturer unveiled its new “Fundawear” product yesterday, which is basically a set of undergarments (bras, panties, briefs, and such)  that will vibrate whenever your partner decides you need some sexual attention. Oh, and you can control it from your smartphone — this sort of brings new meaning to the definition of “phone sex.”

According to the demo video, the vibration sensors are supposed to mimic real human touch. You use the smartphone app to specify the portions of your partners body you’d like to stimulate, which are represented through circles on those body parts. When you touch those circles, it activates the underwear’s vibration sensors.