One of the reasons for the merger is to reach a larger audience.  We all know how difficult it is to raise money for certain areas in healthcare.  I just mentioned one last week and I like this one as it doesn’t sell your data and profiles like so many other consumer mobile health apps and devices.

Actually on some of those I do wonder from time to time as to how solvent they are, in other words could they stand alone and show a profit without the revenue they get from selling data?  That is one of the biggest deterrents today with consumers and health apps and devices in knowing that their data is sold and that companies make billions in profits doing it. Again, I’m all out for those like the Tricoder from Scanadu that are attempting to really provide a good product for consumers and drop the bottom feeding data selling, as more and more is getting use out of context just to make a buck, give a consumers a good product without selling them down the river and it might just catch on.

Here’s a back post on some that use platforms with fuzzy privacy policies.  Theres’ even a community over there for the Blue Button Challenge.  I’m all for any apps that make it simple for both Vets and Medicare participants to get their medical data by all means.  Again I like those devices that can synch to a non tethered PHR to maintain all the information you choose to save and share versus the “other” model.  BD

Jawbone Buys BodyMedia. Launches New “Up App” Platform–Partnerships Allow for More of Your Data and Profiles To Be Sold As Data Selling Epidemic Continues to Grow 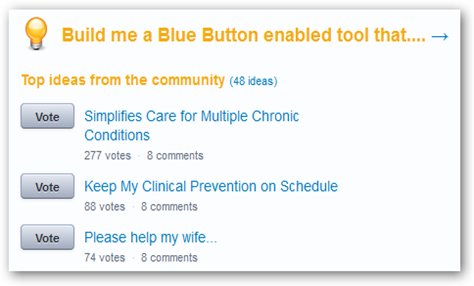 Health Tech Hatch, a site launched last fall as a crowdfunding site specifically for health startups, is joining forces with one of the biggest crowdfunding platforms on the web, Indiegogo.

From the beginning, the company planned to help health startups both crowdfund and beta test their products with patients and physicians. But now, founder and CEO Patricia Salber said Health Tech Hatch plans to focus more closely on the beta testing side, while working on the crowdfunding piece through Indiegogo.

“We quickly learned that it’s really, really hard to raise much money if you’re trying to raise for a startup company [that isn't] any of the companies that have a cool device,” she said.

Startups like Misfit Wearables, which is developing a wearable activity tracker, and Scanadu, which recently set an Indiegogo record for its tricorder-like device, succeed in crowdfunding because they’re essentially offering a pre-sale through their campaigns, she said. But for startups focused on software, general crowdfunding can be tricky, because funders don’t get anything tangible for their contribution and they may want equity in return for their early support. Companies can raise from $5,000 to $20,000, but it’s often not worth the administrative effort and time they have to put in, Salber added.