Desperate hospitals are still among us.  Ok so here’s the blame game, bad management says the government but this is a safety net type of hospital 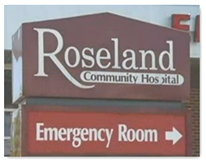 that sees many patients who can’t pay so a lot of charity cases seen here.  Where’s the philanthropy efforts when you need them.  According to this article they are just 2 million in debt and geez I read about hospitals who are much further in debt so the number seems small by comparison.  600 people will lose jobs and patients are being moved to other facilities.  The hospital also claims the state owes them $6 million.  BD

Roseland Community Hospital received notice this week that it must begin moving patients within three days because of its increasing debt, officials said. The hospital reported a $2 million deficit at the end of the 2011 fiscal year.

Hospital officials said they are devastated by the moving notice and said they were expecting the state to repay them what they claim they are owed.

“I’ve seen this hospital do a lot for this community,” hospital employee Paulette Perry said. “I love my job.”