As I read this, and again I’m not a patent expert by any means,

it appears that the US Patent Office has granted the pending application a “Notice of Allowance” which I am assuming it basically states the patent is binding.  Google has a “Patent” Search Engine”  called Google Patents so I decided to take a look as the item as this is far easier than navigating the US Patent page in my opinion and they offer a pdf download as well..  The description I found is below: 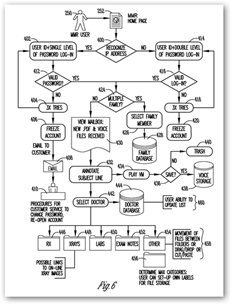 f which are hereby incorporated by reference in their entirety.”

There are several images included that seem to further explain the origin of the filings and as you can read from above most of the newer patents appear to be continuations of those filed in 2005.  We all know technology has made big strides since 2005 and software builds upon itself in essence, and again I’m not an expert on intellectual properties but subsequent applications appear to be based on the original filings from 2005 as granted.  I write about connectivity all the time here with both EHRs and PHRs and this appears to potentially have a royalty or license question with many technologies in use today with prescription data. Stay tuned….BD

LOS ANGELES, CA -- (Marketwired) -- 06/20/13 -- MMRGlobal, Inc. (OTCQB: MMRF), through its wholly owned subsidiary MyMedicalRecords, Inc. (collectively, "MMR"), today announced that it has received a Notice of Allowance ("NOA") from the United States Patent and Trademark Office for U.S. Patent Application Serial No. 13/714,720 entitled, "Method for Providing a User with a Service for Accessing and Collecting Prescriptions." The patent will have 28 claims which include but are not limited to the ability of consumers, patients, physicians and other healthcare professionals to electronically send prescriptions to a pharmacy, access prescriptions from a pharmacy, schedule prescription refills, send reminders regarding prescription refills including by text or email, and identify adverse drug interactions by analyzing prescription medications. MMR believes that these claims are relevant to pharmacies, vendors and others that provide online access to their customers for accessing and managing their prescriptions. MMR is a leading provider of Personal Health Records (PHRs) for patients and MyEsafeDepositBox storage solutions, and electronic document management and imaging systems for healthcare professionals. The NOA represents a significant addition to MMR's existing U.S. patent portfolio which will include eight U.S. health information technology patents with more than 400 claims.

According to Robert H. Lorsch, MMRGlobal CEO, "Today's development is one chapter in my version of MMR's Never Ending Story. MMR's patent strategy is to continue to expand its portfolio to cover our ongoing developments in technology, which will increase licensing opportunities and value to existing licensees who benefit when new patents are granted. MMR already has numerous additional HIT patent applications pending. MMR also plans to continue to file continuation patent applications directed to expanding claims in selected markets such as pharmacies, Personal Health Records, and patient portals, amongst others."

John Goodhue of McKee Voorhees & Sease, MMR's patent attorneys since the inception of the filing of its HIT patents, stated, "The 28 additional claims from the 'Prescription Management' NOA announced today are directed toward online access and management of prescriptions and should increase the value of MMR's intellectual property, specifically as it pertains to current efforts to license hospitals, major retail pharmacies, mass merchandisers with pharmacies inside, and others."

Additionally, the Company acquired biotechnology intellectual property separate from its health IT portfolio as a result of its reverse merger with Favrille, Inc., a biopharmaceutical company, in January 2009. After investing more than $100 million in research and development on its FavId™/Specifid™ vaccine trials and use of customized tumor cells to treat lymphoma patients and other technologies. MMR's biotech assets include an extensive portfolio including its anti-CD20 monoclonal antibodies, data from vaccine trials, thousands of patient tumor samples and other intellectual property which the Company has already licensed to a major pharmaceutical company under a $13 million non-exclusive licensing agreement of which approximately $12 million remains unpaid.

Although MMRGlobal also continues working to license and otherwise exploit its portfolio of biotech assets, it remains focused on its primary health IT business which consists of seven U.S. patents already issued -- U.S. Patent Nos. 8,301,466; 8,352,287; 8,352,288; 8,121,855; 8,117,646; 8,117,045; and 8,321,240 -- as well as additional applications and continuation applications involving inventions pertaining to Personal Health Records, Patient Portals and other Electronic Health Record systems. The Company's health IT patent portfolio was the subject of a May 2, 2013 report on Personal Health Records that concluded that the value of the Company's U.S. patents could reach between $800 million to $1.1 billion in revenue (available at http://michaelbass.com/PDF/Patent_Valuation.pdf ).