Home » Medically Related » My Commentaries » Other Items of Interest » Technology » Bills Gates, It’s Not just a Math Numerical Solutions That Work, As He Discusses “Modeling, Patents, Healthcare And Getting Rich People To Part With Their Money”

Models..here that enough around here?  Models can be 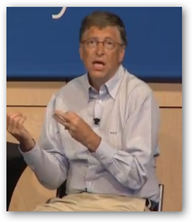 both mathematical and those that do not include math.  Especially in healthcare he says modeling is important and they do it constantly.  Software driven advances are there if we can get companies that can take products and get them out to work for all.  He gave his talk today at the Microsoft Faculty Summit today.

He said certain things need more attention, like online education for one.  He said the same thing he said during his address at Berkeley, those with hybrid focuses.  I think Mr. Gates is the prime example of one who has more than one focus.  Earlier this year he took on the government and their models.

He very high on patents and the partnerships the Gates Foundation has with pharmaceutical companies.  In the poor countries, nobody’s filing patents.  There’s been a lot of talk of software reform and he admits the value of the patent system is needed, but it does need some work.  He says the mix of commercial with free works well together.

Wearable technology is brought up and he says well I guess it can help you cheat (humor).  He was pretty tongue and cheek on this topic.  One question asked was about Washington not being on the band wagon and why are they so greedy.   Bill Gates said he was inspired by other philanthropists.  He uses Warren Buffet as an example as staying with his job but giving his money away.  He talks about the Giving Pledge where members are committed to giving away most of their wealth and he’s doing the same internationally. 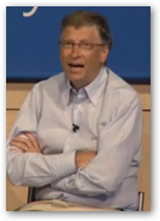 He said the Europeans are the most generous countries with governments working with philanthropy, not here.

Disease modeling he states has gotten very good and the models are needed to work on projects and change all the time.  Climate models he says are more difficult.  He talked about unintended circumstances and he brings up “Context” which is going to be debated endlessly.  Again he comes right back to models and how they will be used.  He says he sees the positive side but realizes there’s the negative side to deal with as well.  He does talk a little bit about medical records at the end and the tough time the evolution has had but not to give it up as it’s worth it.  “We write a lot more code today” he says at the end and it is more complex.  BD

When asked about the open-source and proprietary software related to his foundation work, Gates responded, "Thank God for commercial software. It funds salaries and gives people jobs and terrible things like that. And thank God for free software, which lets you get things out there and play around."

He also was thankful that the pharmaceutical and agricultural companies are protected by patent laws that allow them to create and sell product and hire researchers. "Those guys doing proprietary those seeds have given us knowledge to help poor farmers," he said. "It's a complex system. Anybody who thinks getting rid of it would make the world better, I can tell that's crazy....The mix of commercial with free, without any coercion by countries forcing to be one model or other, in my view is working very well."