Home » Insurance » Medically Related » My Commentaries » Doctor Gets Prison Sentence For His Medical CPT Coding Interpretations, Even Though Jury Found Him Innocent–Under Charged Himself

Doctor Gets Prison Sentence For His Medical CPT Coding Interpretations, Even Though Jury Found Him Innocent–Under Charged Himself

This is an interesting story and probably won’t be the last and you can read all of it from the link at the bottom here.  It’s a bit complex with what the doctor was doing with his coding and the irony here is the fact that it cost the government “less”  not over billing at all.  As new procedures come up that have potential life saving abilities we might see more like this.  He was not attempting to cheat but was rather addressing the billing the procedure as it related to the available codes that were the closest match.

The doctor even tried to justify the fact that perhaps a new code was needed to accurately bill and he ran into issues with both the FDA and CMS.  As the image here indicates documentation can be complicated and many primary MDs have “under coded” for years with the 99213 so they would not have to submit additional complex information if it was a routine simple health issue.  Electronic medical records have helped doctors with methodologies to bill today and make it simpler to substantiate so we have more 99214 codes billed.  With paper billing the submission 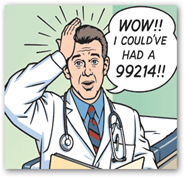 of the documentation can stall a claim for up to 120 days or more and MDs need cash flow so again the under coding with getting paid fast versus the delay would win.  It even seems that HHS got confused on such items last year when they sent letters out accusing doctor and hospitals of all being cheaters and sure are some but to tell all they were cheaters just pretty much showed the lack of education in how all of this works in my opinion.  It made a lot of medical societies and vendors mad as they all saw it the same way and to have Holder from the DOJ sign on too well it gave a damsel in distress type of perception, adding insult to injury.

This sounds more political and the fact that perhaps both CMS and the FDA didn’t have the time and resources to explore further?  The doctor claims his procedure saved lives as had less risk than what the current approved procedures do and allow for.  How can a jury claim he is innocent and he still ends up with a jail sentence?  I can see where this is a complex procedure that an average jury may not understand each detail but the process of no code being available it pretty straight forward on that portion.

The doctor also demonstrated that his procedure was also the approved methodology in Korea.  The government wasted 7 years on this case.  The doctor is a nuclear cardiologist and in the past had lead a campaign with isotope generators were pulled and additional warnings were provided, a good thing.  His procedures cut the time down to one fifth of the time, uses less radiation and is cost effective.  This is what CMS and the FDA ignored and yet we see new procedures and changes all the time.  This indeed sounds very political like someone had it out for the doctor and it’s more than just CPT codes but that’s what it could all be hung on.  BD

The Association of American Physicians and Surgeons (AAPS) recently published several articles telling the story of cardiovascular surgeon John Natale, M.D., who is in prison after being accused of attempting to defraud Medicare. On November 1, 2012, Natale began a 10-month prison sentence, though at trial a jury found him innocent on all charges of fraud.

Here’s his story: Between August 2002 and October 2004, Dr. Natale operated on five seriously ill elderly patients, averaging 78 years old. All the patients lived through the surgery, “despite an expected mortality of 90 percent.” The 63-year-old Natale, who “routinely worked from 5:30 a.m. until late at night,” was “habitually … behind in dictating his operative reports” and

when he filled out the reports weeks after the surgeries, he incorrectly stated that he repaired an aortic aneurysm instead of the type of aneurysm he actually repaired. He was accused of using an incorrect American Medical Association code — a code the government requires doctors use for billing — to bill the government for the procedure he performed, though there is no precise AMA code for the procedure he did.

The charges against Natale were the result of a seven-year government investigation into his records, wherein the government reviewed 2,400 operative reports. Natale’s defense rested upon his claims that he simply made some reporting errors and that there was no fraud because if he had billed the government properly, he actually would have received more money for his services than he actually received. The jury agreed and found him not guilty on all fraud charges. But Natale was imprisoned anyway for making “false statements” in his operative reports, though under the law, according to AAPS, “a false statement is a crime only if made in a deliberate attempt to commit fraud — and, as the jury determined, there was no fraud.” (Emphasis in original.) He was literally imprisoned for making minor errors — if politicians, judges, prosecutors, and Medicare workers were held to the same standard, it would be safe to say that nearly every one of them would be in prison.

The harsh sentence meted out to Natale was evidently meant to intimidate doctors. Prosecutor Amarjeet Singh Bhachu flatly stated: “A message needs to be sent out to doctors.” Yet it could have been worse. Because Natale had the gall to actually defend himself at trial and testify in his own defense, the prosecutor asked for a sentence enhancement for “obstruction of justice,” which “could have resulted in 5 years in prison.” No kidding.