This is really a big job to get the public interested in funding science projects as indicated by a couple interviewed in this article.  Probably much of the reasoning here is due to understanding what the project may be, while some are easier to understand, others can be a bit more complex in nature.  Below is a screenshot of a few of the projects that are launched or are in the money raising scheme of the process from Microryza.  We are starting to see more fundraising in almost every area of business, except banks, thank goodness as we need their money going the opposite direction to fund projects like this. 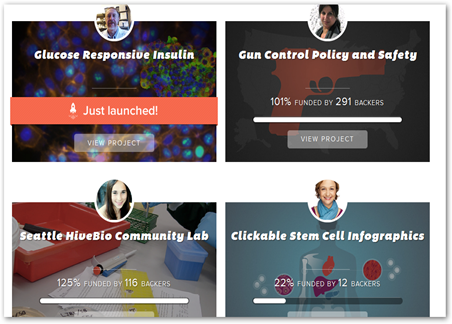 I have my small informal campaign going on here too at the Quack to license and excise tax the data sellers making billions selling data and that is an epidemic and is like the wild, wild west.  It s tough one for most to comprehend as I am talking about taxing an intangible but it’s not bad as it would start a process of moving some money back to the 99% side, which is of course where most researcher are.

And here’s another look at the idea…

In the meantime due to the sequester and other budget cuts scientists are now putting their requests out to the public to help fund their research.  Again, you see crowd funding everywhere.  I have it on this blog although I have not really pushed it a lot but if you do give it any thought, it would be so well appreciated.  BD

Developing a new drug, exploring space or mapping the human brain can cost millions of dollars.

But in recent years, there's been a decrease in federal funding for these kinds of projects and more scientists competing for what money there is.

That's made it tough for researchers like USC's Daryl Davies.He's studying a drug that could help alcoholics kick their addiction. Testing it safely on humans will cost $1 million to $2 million over the next few years.

One benefit of the more traditional system of seeking money from the government is that the government has panels of experts who review proposals for potential problems, he said.  He's worried researchers who get funds straight from the public won't get the benefit of this kind of oversight. But anything that helps fund important discoveries should be encouraged.