Home » Insurance » My Commentaries » United Healthcare Announces Their Departure From the Individual Health Insurance Market in California, Who’s Next?

Like I have said, they have tons of money coming in with government contracts and of course the employer plans.  United quit messing around at HHS a while back and went over to DOD for their contracts, even suing the DOD to get the west coast contract.  In a way Blue Cross is getting 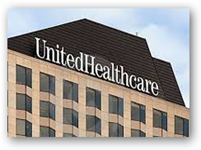 stuck here as insurers compete against each other as they have a very high number of individual policies versus what many of the other insurers have.  Add insult to injury here and we have the California insurance commissioner wanting to ban them as their prices are too high, well who’s going to be left?  What’s AARP going to do in California as Aetna and United were their big push.  A couple weeks ago Aetna made the same announcement with individual policies.  There’s a lot more I have already covered at that post and well worth reading.  WellPoint has an answer for consumers, learn how to use more software:)

United is now building via their subsidiary QSSI the federal data hub, more money in their pockets there as well.

Here’s what one subsidiary, LHI, of United does with VA exams and big DOD occupational health events so who needs individual policy holders one could maybe ask?

The article also states that United plans to participate in about a dozen exchanges in the US, but have not seen one named yet.  Speaking of exchanges, “Will It Blend” is the question I have and will QSSI have the ability to work and network government COBOL legacy systems?  Also the SEC should really take another look at their rules relating to “Tiered Subsidiaries” with the language relating to “significant operations” as well as you can’t see what big conglomerate owns others and why United when they purchased QSSI two weeks after the feds awarded the federal data hub contract was not required to report this to the SEC.  I say building the federal data hub is a “substantial operation” but it doesn’t seem to fit the rules from the SEC as it stands now.  The rearrangement shows “United HeatlhGroup” now under which United Healthcare operates.

Kaiser Permanente has also come under a bit of heat with the prices they will be quoting consumers with plans purchased via the exchanges.  The only break doctors have received of late is this Supreme Court Decision to where they can organize as a group to litigate with insurance companies, again a ruling over a United Healthcare subsidiary practice with contracts.  Here’s a good look at what “is” on file with United and Aetna with subsidiaries at the SEC and it’s probably not complete as those without what is called “substantial operations” don’t need to be reported.  250 plus items listed here. SEC Aetna listings 110 plus items.

not just insurance companies and includes Google, Microsoft, banks and tons of others.  From what I have read it appears that United, when there’s a sector of business they want to target, they create a subsidiary to do so as what was the case with Tri-Care.  Ok so who’s next on the list in California to drop individual policies?  I guess it depends on what their income levels are with government and employer contracts.  It’s all about the business models and if you are not familiar with how that works, this is a great video that is at layman level that basically deals with banks but insurers and other companies have quants and models too, what do you think predicates the constant changes we have, done for profit.

Government for United has certainly become a big interest if not their largest client possibly.  Check out the videos in the footer of this blog or visit the Algo Duping page for some videos that help consumers understand models, algorithms and profit making.  This is how it all works today and just a couple days ago, the CEO of Goldman Sachs said corporations have no other real interest other than the share holders and that about sums it up.  BD

UnitedHealth said it had notified state regulators that it would leave the state's individual market at year-end and force about 8,000 customers to find new coverage. Last month, Aetna Inc., the nation's third-largest health insurer, made a similar move affecting about 50,000 existing policyholders.

Both companies will keep a major presence in California, focusing instead on large and small employers.