Home » Insurance » Medically Related » My Commentaries » UnitedHealthcare Making Bigger ACO Payments in the Future? Guess They Would Be When Either Attaining Ownership or 51% Controlling Interest in 130 Surgical Center Physicians With Beach Surgical Holdings, Another Subsidiary


When I look at the news of late of course payments would grow and represent a larger dollar amount as United and their “Tiered” subsidiaries gain either ownership for 51% controlling interest.  Here’s a couple paragraphs from a recent press release and in the reference here when it says MemorialCare it means the Memorial Care Foundation, which is owned by United.

They formed yet another subsidiary with another doctor’s group, Surgical Care Affiliates with around 130 surgical centers in the US and now they have controlling interest here at 51%.  Now read on further to the second paragraph…;the remaining 49% is owned by the MDs AND Monarch Healthcare, well United owns them too, so really how much controlling interest do we see here?  It looks like more than 51% even when you put it together right?  And what “little” percent do the doctors have?  You can almost bet they don’t have as much interest as Monarch.

“Beach Surgical Holdings, a joint venture between MemorialCare Medical Foundation and the national Surgical Care Affiliates (SCA) acquired a 51% interest in Digestive Disease Center, where SCA will provide strategic and day-to-day management services. Digestive Disease Center, located in Laguna Hills adjacent to Saddleback Memorial Medical Center, has been providing care to the community since 1988, and the new ownership interest furthers MemorialCare's integrated delivery system throughout the Southland. The remaining 49% interest is owned by the center's gastroenterology physician partners and Monarch HealthCare (owned by United too).”

So let’s get back to context here, is this big news

in the way that it is written to make the company look like they are dishing out tons of money?  When they take over more physicians groups, form more subsidiaries look at the real actions going on here.  About 6 months ago the AAFP confronted United on paying doctors less than what they get from Medicare in several states and this is the result of complex contracts that pretty much only the lawyers can understand today.

And recently they said this:

Here’s yet another subsidiary to sell some additional analytics…and the image below gives a quick screenshot of what the Research Institute is all about, data for sale for one. 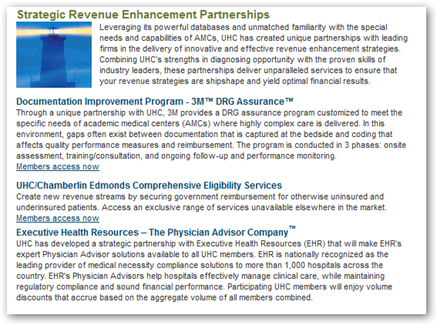 A subsidiary of the American Medical Association makes money selling software of yet another United Healthcare subsidiary so we have sub to sub here putting money down to big conglomerate profit lines.

Here’s just a few of the United subsidiaries that I have over the years written about… biometrics, wellness, international benefits, survey analytics with patents, hearing aids, consulting for drug and devices for the FDA and clinical trials , clearinghouse sub to work with Epic medical records, data mining medical information and records, and here, electronic medical records,hospital analytics and software even used by the VA,  big contract with Tri-Care where DOD was sued to secure, some additional HMOs in Florida, low & middle income housing in New Mexico, HIE technologies and analytics, some miscellaneous EMR software, coding software, Optum cloud platform to sell software, more analytics with software that helps set up insurance exchanges, an in house pharmacy benefit manager, fraud prevention analytics, and a hospice company.

So really, what is the purpose here of this article…they bought up more companies or portions of so with controlling more of it there will be more ACOs, even if United or a subsidiary decided to “force feed” one. More about how they stay under the radar here.  BD

UnitedHealthcare said in July that it will broaden its accountable care organization contracts across its employer-sponsored Medicare and Medicaid businesses in the next five years.

The insurance company pays $20 billion to hospitals, physicians and ancillary care providers through ACO contracts that account for quality and cost efficiency measures. It expects to increase such pay to $50 billion by 2017.

UnitedHealthcare has ACO arrangements with more than 575 hospitals, 1,100 medical groups and 75,000 physicians.