FTC are you listening?  So far as I have been saying for a couple of years nothing has been done here and it needs a path to regulate. 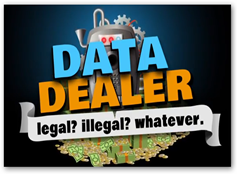 Nobody and I mean nobody is on data patrol and you can bet there’s a lot of “lying their asses off” just as banks did with the sub prime situation.  Maybe this is what it will take to bring this awareness around…..If the government doesn’t see this as a slap in the face I don’t know what it’s going to take to bring some digital awareness around.  The big FTC article about their efforts – USELESS!  They too are Algo Duped.

What I have not been able to understand as well is where is the outrage here with all the flawed data that develops.  Do you as a

consumer enjoy fixing all the data that banks and corporations have made billions on selling, doing this on your own dime..well you are, as they don’t care after they made their money and neither do they care about accuracy and flaws.

So we have to “gamify” this too?  Well if folks maybe wake up from the dead here and see how this game totally exploits you and your 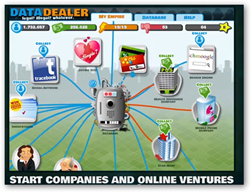 intelligence, maybe it might work:)  We heard “relevant” this week in the verb and nouns of the NSA, well we need to add another word “context”.  That’s the part that will get you when it’s “out of context” when all have been duped.

Numbers don’t lie but people do.  Licensing and excise taxing along with a federal look up site with a simplified format on what kind of data is sold and who they 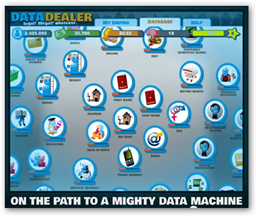 sell it to would go a long ways, much more efficient and create a revenue stream than going the platform route to complicate it even more for consumers who are already getting ripped with flawed data and it’s getting worse.  Who wants these guys handling your personal data, they do it…and as Blue Cross says they want to spy on you if you are a policy holder and see what size clothes you are buying and they may be doing just that but get smart, they are doing a lot more than that with the Query Masters and non linear data methodologies, looking for the “Big Data Fairy” that will save money.

So where is the outrage folks?  Banks and companies have the potential to impact your absolute daily life more than the government and besides who do you think buys a lot of data from private companies, the government.  Watch the video at the link below or just scroll down to the footer as it’s there with a few other recommended videos from the Quack that help educate. 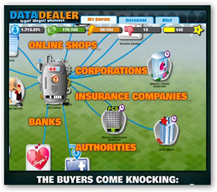 These are the proprietary algorithms that make billions for banks and companies.  Insurance companies cut a fat hog here too.

If it takes a game to educate, then so be it..but gee, time to wake up and see what goes on in the intangible world of models and algorithms…what do you think is taking your money, data selling enables this.  Maybe it’s good enough to be crowd funded as that’s the next stop for the game.  Hope it’s a learning tool and an awakening as again I see this as an absolute call for a huge awakening.

Again, give this some real thought when you log on to Facebook, or your bank, or put on your Fitbit or other device that records and sells data…and the fact that we don’t seem to have the intelligence anywhere in government to address this, and acknowledge the epidemic this has become.

Visit the Algo Duping page for more videos that explain more of how this works from getting duped on studies to the story of how banks duped you with the Sub Prime software models used for the mortgage scams, couldn't’ have happened without it.  I have been at this blog beating everyone over the head for the last 2 years about this and the epidemic keeps getting worse.  So learn how to hack data bases and have fun:)  There’s no risk assessment here, it’s all a moneyball scheme.

Learn how to sell your profile to an insurance company…(grin)…and get the dope off the dating sites:)

ANY PRIVACY LAWS THAT DO NOT INCORPORATE DATA SELLING IT INFRASTRUCTURES FOR REGUALTION ARE LAWS WITH NO BALLS AND DO NOTHING FOR CONSUMERS AND THAT’S ALL THAT WE HAVE SEEN.

So while all search for the non linear “Big Data Fairy” the elves are at work stuffing money in their pockets and it’s time to license and excise tax the data sellers, all of them.  BD

All kinds of companies and services – social networks, data brokers, loyalty card programs to name just a few – amass and analyze details about millions of consumers’ activities and preferences. But the inner workings of this surveillance economy remain largely opaque to the public 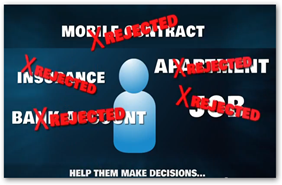 despite the recent revelations of widespread government data-mining of people’s phone and e-mail records.

Players can buy additional profiles from a variety of sources like a dating Web site, a sweepstakes company – or even a disgruntled nurse named Mildred who is selling access to her hospital’s patient database. 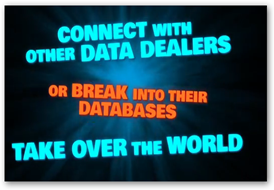 their profiles to a fictional large employer called “Star Mart,” a health insurance company or an imaginary government entity referred to as “Central Security Agency.”

Although the first version of Data Dealer is meant only for individual players, the game’s developers are raising money on Kickstarter this week to finance an upgraded version that will let people play against one another – and hack each others’ databases.

Wednesday, July 10, 2013
My Commentaries , Other Items of Interest , Technology