I first wrote about the Scanadu Tri-Coder back in 2011 when the project began and the company had some seeding money to get started.  Since such time it has gone to crowd funding to raise more support. 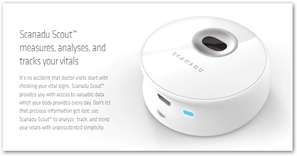 Not to be outdone at the same time Homeland Security announced they were also working on a similar device except they want to be able to get your vitals from being 40 feet away from you, which can also have good use in an ER room, etc. but with the news of late on spying I think the Scanadu device is ahead of the game.

Why do I like the device?  It doesn't sell your data like so many other consumer apps do that are out there today and you get to remain in the driver’s seat on who you want to share your data with.  You can read more about my privacy and data selling campaign here for those “other” companies.  The Tri-Coder looks to finally be simple and easy enough to use and will be a tool to bridge the doctor patient relationship and not tear it down like we see so much of out there today.  BD

The Scandu Scout became the most funded campaign in Indiegogo history today. The health-scanning device raised $1.37 million so far, with still nine days left in the campaign. It surpassed the “Let’s Build a Goddamn Tesla Museum” campaign, which held the existing Indiegogo record of $1,370,461 in total funding.

Scanadu Scout is a sensor that people hold to their temple. In less than 10 seconds, it will collect data on vital signs, including pulse, heart rate, respiratory rate, blood pressure, temperature, and even emotional stress. Billed as the “the biggest innovation in home medicine since the invention of the thermometer,” Scout gives people unprecedented access to information about their bodies outside of a doctor’s office.

De Brouwer said that the “center of gravity” in the American health care system is moving out of hospitals and into outpatient care. Tools like this can lead to better, smarter care for more people at a fraction of the time and cost. Rather than scheduling doctors appointments when you are unsure of your own health (or that of your child’s), Scout gathers more facts before taking the time to visit a clinic.