The Privacy Report, License Plate Data for Profit–Privacy Exploitations, The Next Frontier?

First off, I have no problem with police agencies using monitors in their cars as this is what it was designed for but what we have here is yet another problem with the word “context” and it gets replaced with the 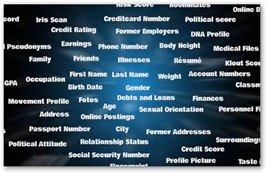 word “profit’.  That’s the problem as now more see it as an opportunity to run some queries and “flip algorithms” for profit.  Again we do need to license and tax these folks, soon. Billions and I mean billions are made with intangible resources, aka data selling and when it’s wrong and contains errors, who fixes it for free..we do, after they have made their profits.  I benefited from the scanner being used and had my stolen purse returned to me by police even before I knew it was missing due to a scanner identifying a stolen care that was drive by the thief, so there is real use for it when done properly.  It was odd as the police by the time they called me had already recovered my purse and I didn’t know it was missing yet as I was not carrying it and it had been a break in to where I lived.

It is so bad there’s a game out that exploits the inability or lack of education of our government to regulate this, license to sell and excise tax will do it, just like a quarterly sales tax.

This game I feel is important as the message it carries that you have a lot of folks who write code that think they are better than you and will use such technologies to take advantage of you and your money.  Insurance companies do this to disguise their data scraping efforts, it’s a joke and I hope none of you fall victim there as most of their fun games lack any real luster anyway…like Famville for one example.  Guess what they were trying to mimic to collect and scrape data.

ABSOLUTE FEEBLE ATTEMPT BY THE FTC, EITEHR THEY DON’T CARE OR THEY ARE UNDER EDUCATED IN THIS AREA, I DON’T KNOW WHICH APPLIES.

So, now let’s take your face and match it to a license plate…9the car repo man can do that if he’s smart enough as they use these scanners too) was that really you driving..the facial recognition will validate that and bingo…more data for sale. So here’s old Blue Cross or United hanging out, they are already in this game to see if you are buying clothes a size larger (that’s what Blue Cross said not me) and gee now they can see where you are, and if you bought a size larger, gee did your car ever get near any gyms?  Think about that.

It’s the same old story with someone wanting to make a buck and sell your data and at the same time risk taking it out of context to make that buck.  It’s easy to do with data.  If you want to see some real nerds on this topic, look up the quantified self guys, they think they can fix everything with data and they are a strange algo duped bunch that could be a group that would use stats out of context.  These companies come under NO privacy laws and decide who gets to use the data.  We are back to “trust me”….BD

The autonomous readers — small cameras affixed to police vehicles, light poles, bridges, street signs, buildings, you name it — chronicle a vehicle’s whereabouts to the second. Only a fraction of photos provide an immediate “hit” matching the vehicle to a crime. At least one town, the affluent San Francisco suburb of Tiburon, has cameras operating on the only road leading into and out of town. Nationwide, the authorities and even private enterprise maintain a trove of locational data on citizens’ movements, according to the report.

Data from these cameras, according to the report, “is being placed into databases, and is sometimes pooled into regional sharing systems. As a result, enormous databases of motorists’ location information are being created. All too frequently, these data are retained permanently and shared widely with few or no restrictions on how they can be used.

“These huge databases of plate information are not subject to any data security or privacy regulations governing license plate reader data,” the report said. “These companies decide who can access license plate data and for what purposes.”