Home » Insurance » Medically Related » Half or Better of the Accountable Act Call Center Jobs Will Be Part Time With No Benefits in Contra Costa County, California

Half or Better of the Accountable Act Call Center Jobs Will Be Part Time With No Benefits in Contra Costa County, California

This pertains to one of the call centers and ironically these people get no benefits and might just have to fork out and pay for insurance themselves through the exchange.   In reading this article, there seems to be some confusion, mismanagement or both of the above in how many of the jobs were to be full time and how many were to be part time. 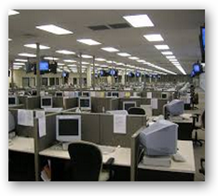 It sounds like everyone thought they had a full time job until decisions were made.  The full time employees work the day shift and the part time fill in after regular hours it sounds like.

They had over 7000 applications for just over 200 jobs and one person said they quit another job to take this job and found out later it was only going to be part time.  Part time pay will range from $15.33 to $18.63 and the part time are given the option of purchasing their own insurance but it runs from $600 a month all the way up to $2900 a month, typical of what we see in many places today so the part timers might really have to depend on getting a break by purchasing their own insurance through exchanges.  You can see where the union has become involved too with asking the county to pick up 80% of the cost of the premiums since the employees will be Contra Costa County workers.

I guess things could be worse if they were outsourced to the Philippines, India or elsewhere but I think due to the complexities of the project and the constant changes it will be challenging enough to stay on top of it here without adding that element..  BD

CONCORD -- Earlier this year, Contra Costa County won the right to run a health care call center, where workers will answer questions to help implement the president's Affordable Care Act. Area politicians called the 200-plus jobs it would bring to the region an economic coup.

Now, with two months to go before the Concord operation opens to serve the public, information has surfaced that about half the jobs are part-time, with no health benefits -- a stinging disappointment to workers and local politicians who believed the positions would be full-time.

The worker said no clear reasons for the change were given.

Another applicant said he ditched another job offer after getting a congratulatory hiring letter from call center operators in June, only to be given the runaround in the months since.

During negotiations months ago, Service Employees International Union Local 1021, which represents the customer service agents, demanded 80 percent of health insurance premiums be paid by the county, and 20 percent be paid by the employee. SEIU did not return a call for comment.