We have yet one more contract added to verify incomes of those who apply for insurance and qualify for subsidies.  This is a division 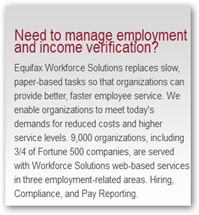 of Equifax that the company purchased formerly named the TALX Corporation.  It was just recently Serco was given a contract to set up the big mail room and it was also announced this week that the parent company, Serco in the UK is now under investigation for fraud in the UK and new contracts have been suspended until it is resolved. The fraud charges are related to billing for tens of millions with electronic tagging.  The 5 year contract with HHS is worth around $1.2 billions.

Equifax will be able to use sources like credit card applications and is supposed to develop a plan to ensure accuracy is there.  We all know how riddled with errors that credit agency information is as a whole, but so far there is no mention of using a full on credit report but who knows.

Is this an opening to help Equifax sell their personal services too?  Just a question that popped into my head.  HHS says this would be more current than the information the IRS could provide and for another issue, they wouldn’t have to deal with IRS legacy COBOL systems.  BD

Under the contract, Equifax can use sources like credit card applications but must develop a plan to indicate the accuracy of data and to reduce the risk of fraud.

The American unit of the Serco Group won a contract worth as much as $1.2 billion on June 27 to provide “eligibility support services” to health insurance exchanges around the country.

Subsidies, in the form of tax credits, will be available to millions of low- and moderate-income people who are not eligible for Medicaid and have not been offered affordable coverage by employers.

Contract documents show that Equifax must provide income information “in real time,” usually within a second of receiving a query from the federal government. Equifax says much of its information comes from data that is provided by employers and updated each payroll period.