This is a good article that they are now reviewing what they are selling which does NOT fall under HIPAA.  Recently data analytics and re-matching has become a lot easier with new methodologies.  In the article below a couple folks say there’s not really anything to fear, but I would guess those are the duds who are not aware of how data queries and re-matching works today with the web as a few years ago we did not have this massive exposure.   We do now though and look and see who’s number two on the list…and United buys and guess what, they have tons of data bases and gosh knows what it gets queried with as they have tons of data bases in house so they but to resell. Heck just in writing software I used to do it with queries with sample data to make sure everything with the program was working correctly so you pick up that skill as a programmer in just writing software so not hard at all to figure out how those who want to profit do it.

Talk to any Wall Street quant and re-matching is just a matter of fact comment so it goes for other industries. 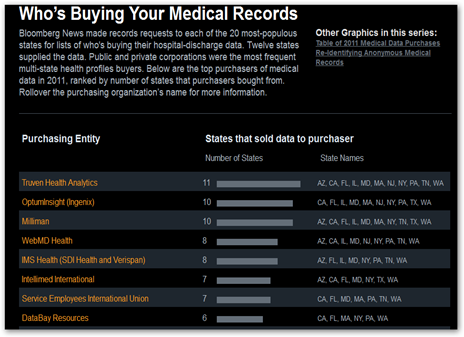 Outside of government data you can find Blue Cross and United buying up your Visa and Master Card records too.

This article goes over some of the new revisions states are taking but this industry really needs a pathway to regulate and that is to buy a license to sell data.  More on that at the link below.  It’s a good idea and we can excise tax those who profit, quarterly like a sales tax.

We have no idea what kind of queries go on behind “closed server doors” especially when you have a few hundred subsidiaries like United as they may not make all their analytic public on what they “really” do.  I do see them advertising for tons of data miners and analysts all the time though.  BD

Some U.S. states are reviewing their policies around the collection and sale of health information to ensure that some patients can't be identified in publicly available databases of hospital records.

Washington suspended distribution of the information and developed a confidentiality agreement that all buyers must now sign, according to Donn Moyer, a spokesman for the state’s Department of Health. Bloomberg News, working with Harvard University professor Latanya Sweeney, reported on June 4 that some patients of Washington hospitals could be identified by name and have their conditions and procedures exposed when a database sold by the state for $50 is combined with news articles and other public information.

States can legally release such details because the agencies are exempt from the Health Insurance Portability and Accountability Act, the 1996 law that sets federal standards for medical privacy. Organizations that are covered by HIPAA including health care providers, insurers and their business partners are forbidden from disclosing such information.

Companies that benefit from buying states’ hospital records include IMS Health Inc., the provider of prescription data that was taken private by TPG Capital and Canada Pension Plan Investment Board for $5.06 billion in 2010. Other buyers are OptumInsight, a division of UnitedHealth Group Inc. (UNH), the biggest U.S. health insurer, and WebMD Health Corp. (WBMD), which supplements its consumer website with advisory services for companies and insurers.