Breast Cancer Treatments – What is a MammoSite?

Good story on the MammoSite, but again there’s not enough real clinical information available simply due to time and the short amount of time the product has been on the market.

It certainly offers a much shorter treatment time by comparison, but each case is it’s own.  There’s many areas that go in to the decision 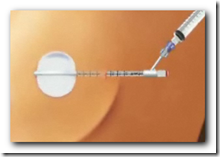 making process, but some critics felt the FDA should have given more time to evaluate, as the question is apparent now on many devices that are approved.  The 510(k) process is an expedited review, where as a device such as this one would not require the testing and review that an artificial hip or knee would go through.  On the other hand if the procedure had not been approved, there would be a large group of individuals protesting at the FDA, so medical devices are also science where it’s hard to put a full 100% stamp of approval on the product.

This is an excellent site and offers a lot of information, and it’s just so sad that physicians don’t give patients the information to review ahead of time, as was the case of my mother a few weeks ago, and I guess even with the latest technology, some physicians are still afraid to help out in the education process, something that is needed to make a decision, and the site has a full section devoted to patient education as well, refer the site, email the link, and they even have a DVD to send out or at minimum print out a page, but none of that was done through the physician’s office.  For that matter, I would think the company would give the physicians a stack of DVDs to give to the patient so they could go home and review.  Here’s the physician’s outreach page on the site too.  There are videos at the site as well.

I am glad I am a healthcare blogger at times because doing the research has allowed me to inform other of treatments that they may not be aware of, treatments their own doctors are not aware of too, as healthcare is evolving so quickly that there are new techniques and procedures coming out every week, I do some interviews on this site about them as well.

I hope by sharing this information here that perhaps it will reach a few others in the way of education and help explain one of the treatment alternatives to treating breast cancer.  BD

The surgeon referred her to a center in Oakland, Calif., specializing in a newer form of treatment where radioactive “seeds” are inserted in the tumor site. It could be completed in only five days instead of the six weeks typically required for conventional treatment, which irradiates the entire breast using external beams.

To Ms. Medlock, it seemed an obvious choice. The newer treatment — given through a system called MammoSite — has been performed on about 45,000 breast cancer patients in this country since the Food and Drug Administration cleared it for use in 2002.

Only when Ms. Medlock, 49, sought a second opinion did she learn a startling truth: MammoSite is still highly experimental.

The agency let MammoSite on the market on the basis of a study involving only 25 women that did not answer the fundamental question of how effective it is against breast cancer. Six years later, many cancer specialists say there is still no conclusive proof that it works as well as conventional radiation. The F.D.A. says it did require a label warning that the system had not been shown to be a substitute for conventional radiation.

On one level, MammoSite was simply the latest version of brachytherapy, a technique that delivers radiation inside the body through seeds. Brachytherapy is widely used to treat prostate cancer because it allows high doses of radiation to be directed to a small area.

But critics, say some of MammoSite’s popularity is a result of the relatively high reimbursements paid by insurers.