Sound familiar to what we have here, Japan wants seniors to pay more for their health care.  A protest state discrimination is taking over was in the news this week.  BD 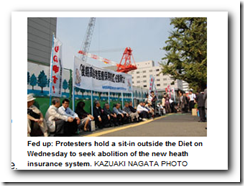 covering the "later-stage elderly" aged 75 and older. News photo Fed up: Protesters hold a sit-in outside the Diet on Wednesday to seek abolition of the new heath insurance system.  The group was made up of members of labor unions, medical staff and other organizations. Lawmakers from four opposition parties joined the gathering and helped shout for the system to be killed. A bill introduced by opposition parties to abolish the controversial system cleared the Upper House in June and is now awaiting deliberation in the Lower House

The government's aim in adopting the new system was to have the elderly more fairly share the nation's swelling medical bill.