Physicians can now implant seeds to any and every region of the gland and the device is finding cancer cells that previously were previously undetected, yet blood test were showing cancer cells were present.  Video at the link below.  If this can locate and find cancer cells that were previously not detected, then it should go far in becoming a mainstay in prostate cancer detection very soon.  It is also used for radiation therapy to deliver to the exact regions affected, leaving more healthy tissue unexposed.  BD

Leading radiation oncologists are using the TargetScan Touch(TM) system to deliver radioactive seed therapy in the prostate. The innovative technology is based on a motionless probe which stabilizes the prostate during procedures. With the gland stabilized, physicians use a touch-screen interface and 3-D ultrasound images to map and confirm placement of radiation. 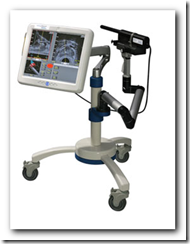 Joseph Bailey was diagnosed with prostate cancer in March. He agreed to try the Targetscan procedure after conventional biopsy methods failed to confirm problems with preliminary blood tests, indicating cancer. Targetscan not only detected the cancer, but also pinpointed the areas that need to be treated.

"I was happy to go along with it because it detected the cancer that I have," said Bailey.