A card-swipe for medical tests

New technology in development, a card that you would swipe just as is done with credit cards.  As listed below the card could give instant information relative to PSA testing, Herpes, and markers with personalized medicine.  The results would be within a few minutes instead of days or even weeks as we have with some test today.

The technology is using the same principles use on a PC today with hard drives and MP3 players, so someday we could look at a multi purpose MP3 player/medical test device?

It also has environmental implications as well to find bacterial in water for a simple example.  The card when finished could hold up to 1900 samples for testing.  Amazing technology in the works, and here I am just hoping to have my medical information on a card I could swipe, and this goes much further than just data!  BD

University of Utah scientists successfully created a sensitive prototype device that could test for dozens or even hundreds of diseases simultaneously by acting like a credit card-swipe machine to scan a card loaded with microscopic blood, saliva or urine samples.

The prototype works on the same principle – giant magnetoresistance or GMR – that is used to read data on computer hard drives or listen to tunes on portable digital music players.

"Think how fast your PC reads data on a hard drive, and imagine using the same technology to monitor your health," says Marc Porter, a Utah Science, Technology and Research (USTAR) professor of chemistry, chemical engineering and bioengineering. 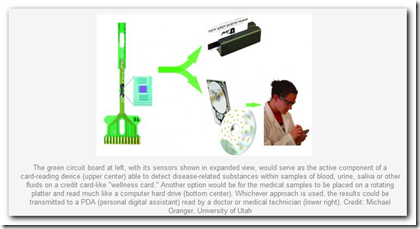 The prototype card-swipe device consists of a GMR "read head" and sample stick. Right now, the device is about the size of a PC. But Granger says that when it is developed commercially, the GMR sensor device will look like a credit card reader.

-- Current tests for prostate specific antigen (PSA) – an indicator for possible prostate cancer – only look for "free" PSA but not for other forms. A card-like sample stick with multiple "addresses," each with an antibody that binds to a different kind of PSA, would be able to test a blood sample for multiple forms of PSA and for their relative abundances, and thus be more reliable in predicting prostate cancer, Porter says.

-- "The same approach can be used to screen patients for other cancers or heart disease," Granger says.

-- A rapid, card-reader test for genital or oral herpes could help reduce the number of Caesarean sections. If obstetricians suspect maternal herpes, they sometimes do C-sections to avoid transmission to the newborn, Porter says. A conclusive, rapid test for herpes can tell doctors if a C-section is really necessary.

-- Porter envisions GMR sensors as tools for personalized medicine, in which "you want to establish everybody's baseline with various health markers" – tests for various diseases and disease susceptibilities. Then, people would monitor health changes by periodic re-testing in a doctor's office, pharmacy or perhaps at home.

-- GMR sensors could provide rapid detection of porcine parvovirus, a respiratory infection that kills pigs; feline calicivirus, which does the same to cats; and bacteria that cause Johne's (pronounced yo-knees) disease, a fatal wasting disorder in dairy cows that costs $1.5 billion annually in the United States.