The gene is called an enhanced green fluorescence protein that allows scientists to see inside the cat and how thing work.  It is completely harmless to the cat.  Wild and interesting technology with genomics R and D.  BD 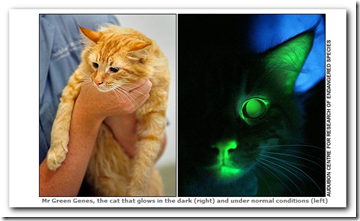 Named Mr. Green Genes, he look likes a six-month-old cat but, under ultraviolet light, his eyes, gums and tongue glow a vivid lime green, the result of a genetic experiment at the Audubon Centre for Research of Endangered Species in New Orleans. Mr. Green Genes is the first fluorescent cat in the United States and probably the world, said Betsy Dresser, the centre's director. The researchers made him so they could learn whether a gene could be introduced harmlessly into the feline's genetic sequence to create what is formally known as a transgenic cat. If so, it would be the first step in a process that could lead to the development of ways to combat diseases via gene therapy.

Glowing creatures made international news earlier this month when the Nobel Prize in Chemistry was awarded to three scientists who had discovered the gene through their work with jellyfish.

Scientists make cat that glows in the dark – Telegraph