Home » My Commentaries » Other Items of Interest » With bloggers Is anything Off The Record?

Good post here about bloggers, you never know where we lurk, but more importantly, what are they going to blog about?  Well for the most part good bloggers use common sense, but as in anything out there, there’s always exception to the rule.  Personally from this picture, I think photographers represent more of a threat as the old saying goes a picture is worth 1000 words.

There was no way this government official knew the bartender was a blogger, but then again, she lost her job too, so what was accomplished here, a whole of nothing in my opinion.  One thing today we are all still getting used to is that the minute we step outside our front door, there’s the potential of someone watching, and that business is getting busier a some of the monetary gains from some of this when published is growing too, so guess the old rule of thumb is to be sure and project the image you want seen as soon as you step outside your front door. 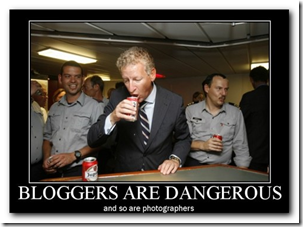 Also, from the blogger’s perspective an old saying of mine is “what goes on the internet, stays on the internet”, so if you blog about something, make sure it’s what you want to be read and seen out there too as it is a reflection of yourself too, as it just takes a couple seconds for someone to “cache” or save the page and republish, even if you remove the original, if someone wants it bad enough, it will happen, especially if there’s an ax to grind or money to be made.  BD

There’s a lot of buzz here in the Belgian blogosphere and mainstream media about an incident involving a New York-based blogger, who was fired from her job as a bartender after publishing a post on the bar visit of a Belgian politician. I’m generally hesitant to share ‘local’ stories here because I want to keep it relevant. In this particular case, I think it is.

Worst part, she wrote, was the fact that one of the politician’s advisors admitted to her that the meetings they were there for on taxpayer’s money were in fact cancelled because the UN was meeting in Geneva (which is about 330 miles from Brussels). He reportedly told her they had decided to come to NY anyway despite being aware of the cancellation because the political situation here was ‘calm’ and that he’d ‘never visited the city anyway’.