One of the founds is no other than James Thomson, an early stem cell pioneer, and the company just raised a few million more with investors, so all biomed is not in the same situation, I think it depends largely on what area of biomed is the focus.  So in the future, maybe donate some DNA, grown some stem cells, put them away in the bank and off you go to live life until you need them.

The stem cells could be turned into heart cells, liver cells and so on.  Interesting new concept with research and development and treatment plans of the future from Cellular Dynamics.  BD

Scientists engineered the tissue cells to be pluripotent, which means they could turn into the beating heart cells under the microscope, or liver cells or any other cells in the human body. These cells, the scientists said, are just the beginning of the coming revolution in medicine. In the future, people might well be able to store personalized stem cells engineered from their own DNA. The cells would be banked so doctors could use them as part of therapies or to test drug reactions as the need arises. The key to that future is the ability to produce stem cells in big quantities with complete reliability. 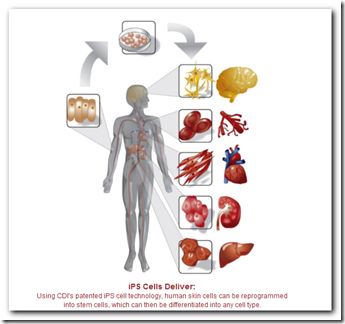 The robot was built through a partnership with a Swiss company called Tecan. It feeds and grows stem cells and reprograms them into specific cell types. From CDI's view, the robot removes the variability of individual lab workers to create better cells in bigger quantities.

Heartbeat of a new industry - JSOnline