What is a Biofilm?  Wikipedia offers some additional information here.  Why do patients develop infections and why are the normal treatment plans not successful, this is the goal of the research with genomics and working to identify why failures exist with eradicating the bacteria, relative to foreign devices being implanted into the human body.  Sometimes the device has to be disposed of and replaced with a new device.

With the R and D at this at the West Penn Allegheny Health System, Center for Genomic Sciences, the goals are to create development of materials and surfaces that are resistant to allowing bacteria to grow.  Staphylococcus aureus is one in the forefront of the research for obvious reasons.  Streptococcus pneumoniae is another one that has is under research as it is related to ear infections and sinusitis.

Bacteria lives all around us and is sometimes referred to as “slime” in the research area, how Dr. William Costerton is earning a living, researching the slime and is challenging the old way of thinking and attacking the problem for solutions.  This is a nightmare that nobody wants to occur with any knee or hip surgery, much less an implanted heart device to have an infection lock on and not be able to get rid of it.

Additional information is also available here with a few additional points about biofilms, dental plaque is another are being investigated as well, when you stop and think about dental implants, here might be another area ripe for additional input.  I found some of the information here interesting as I have some dental implants and somewhat wondered why the common cold is a bit tougher on me which seems to have occurred after having the dental implant surgery done many years ago.  BD

Or, to be more precise, on biofilms, the name he gave to the colonies of bacteria that live on everything from rocks in a river to the inside of oil pipelines to the surfaces of some artificial hips and knees. 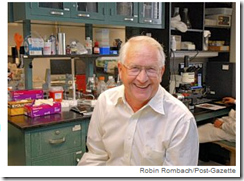 Now, because of an unusual twist in his career path, the 74-year-old scientific pioneer has ended up here, as director of biofilm research at the Center for Genomic Sciences at the West Penn Allegheny Health System.

While biofilms exist in myriad locations around the world, the genomics center will pay particular attention to how they cause persistent, often devastating infections in artificial hips and knees and inside catheter lines.  Surgeons work extremely hard to avoid infections in artificial joints. But when they occur, they can be almost impossible to get rid of, Dr. Ehrlich said.

"When you put a foreign body into somebody," he said, "it provides an unprotected surface and it allows the bacteria to essentially put their backs up against a wall, and once they get established, the only way you can defeat them is to remove the device."  "So this is a sophistication that we weren't expecting from bacteria at all, and sort of explains how you can use an awful lot of antibiotics and never get rid of some of these infections completely," he said.

Because of these kinds of sophisticated defenses, doctors who work on artificial joints do everything they can to avoid biofilm infections.  Millions of people each year are infected by biofilms, he said, and hundreds of thousands die. 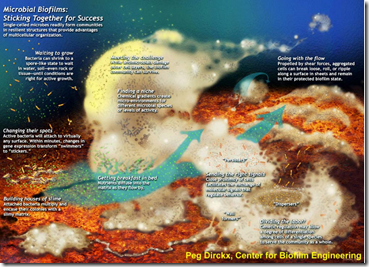 "People are dying because we can't get away from 150-year-old thinking, and he has challenged all that. You've got to give him credit for that."

This scientist's mission? To outsmart the slime