Invasion of the implants – this one for Sleep Apnea and the patient will have a device to turn the device off and on.  If you have looked around You Tube you can find individuals who have made videos of what they are like with an implanted unit turned off and on and these are pretty much patients with Parkinson’s.  This device is different in the fact that it is not 24/7 and an external device will turn the unit off and on.

Now when you sleep, let the device worry about your breathing. 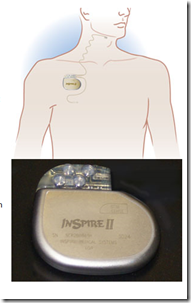 The device has been approved by the FDA and should become available sometime next month.  By appearance is seems to resemble the shape and size of ones from Medtronic, and that may be due to the fact that Medtronic was a participant in the development of the device.  Just recently another implant was approved by the FDA for Obsessive Compulsive Disorders.  Implants sure seem to be on the move and one question I ponder, will we some day be seeing individuals with multiple implants?  Time will tell.  BD

It is estimated that one in fifteen adults has moderate to severe OSA(1). People with OSA experience recurrent blockage of their upper airway during sleep, resulting in frequent arousals from sleep and reduced oxygen levels in the blood. This happens in patients with OSA because the muscles that normally hold the airway open during wakefulness relax during sleep and allow the airway to collapse. When the airway is partially closed and/or the muscles relax too much, trying to inhale will completely close the airway, resulting in an obstructive sleep apnea event. Depending on the degree of severity, OSA is a potentially life-threatening condition. According to a recent report(2) from the National Center on Sleep Disorders Research and the National Institute of Health, someone who has undiagnosed or is non-compliant to treatment of their sleep apnea is significantly more likely to have a heart attack, a stroke, cardiac arrest during sleep, or a harmful accident.

Deep Brain Stimulation for Dystonia and Parkinson’s Disease and More?