This a brand new technique and is not FDA approved yet, but they are hoping by the end of the year to have approval on this process.

There is a video at the link that explains more.  From the pictures below it certainly looks at though it has done something for the patient who had a brain tumor that grew back.  The patient had to be kept unconscious for 12 hours for the procedure to take place.  I am guessing this could also work on other areas of the body too with tumors.

Body temperature is maintained as the patient is inside an MRI for the entire procedure.  This procedure is offering hope to those who have had what has been considered inoperable surgery for their brain tumors.  BD

Ruth Perko is one of at least 97,000 Americans diagnosed with a malignant brain tumor each year, according to the National Cancer Institute, and nothing can prepare her for the experimental treatment she's about to receive.

With the probe now inside Perko's brain tumor, doctors fire the laser. Each burst lasts anywhere from 30 seconds to a few minutes and generates up to 160 degrees (Fahrenheit) of heat, enough to restrict blood flow to the area and kill the cancer cells. Doctors carefully monitor the temperature by keeping Perko in an MRI machine throughout the procedure.

"We can monitor the temperature rise in the tumor, second by second, while we're scanning the patient," said Dr. Stephen Jones, a neuro radiologist at the Cleveland Clinic. "Better than that," he said, "we can see the predictive margins of response where we are killing the tumor... where the cancer cells are dying."

This is the before picture. 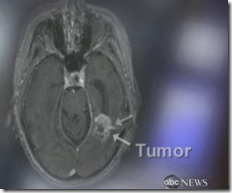 This is the after picture. 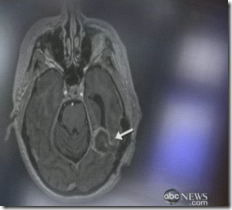