If you thought competition was tough with generic drugs, there’s a new kid on the street, biosimilar drugs.  The link below goes to a page on the Genentech website that explains the process in full detail.

“The terms "Biosimilar" or "Follow-on Biologic" refer to products that are marketed after expiration of patents, which are claimed to have similar properties to existing biologic products. Due to the complexity of biologics, a product can only be made that is similar, but not identical.”

Unlike generics that have to maintain the same properties, biosimilars are a bit different in the fact that they cannot be exactly the same; however, the drugs are to be used to treat the same ailments and diseases.  This gets a little sticky as with generic drugs, the properties of the name brand drug are somewhat of a basis for approval, while biosimilars are a bit of an open ball game, being this is a somewhat new field to be explored as well as their potential requirement to adhere to the same clinical trial structures as the original drug.

That being said, the purchase of Insmed, a biosimilar company by Merck somewhat tells the direction of pursuit that is to follow from some of the major investors, drug companies.  This could stand to open up new markets and pricing for many of the biotech related treatments if biosimilars begin to compete with the initial name brand drug.  There are ongoing meetings with the FDA on how intellectual property is viewed as well.  The video below talks about the business model and desires of the Biosimilar company.  BD

If Merck's creation of its BioVentures group got our industry talking about pharma's role in FOBs, you can expect the clamor to grow even louder now. The company's willingness to fork over $130 million for Insmed's full capabilities shows that it is playing offense when it comes to FOB capacity. Indeed, Merck and Teva have emerged as the preeminent players in pharma's race to develop FOBs. 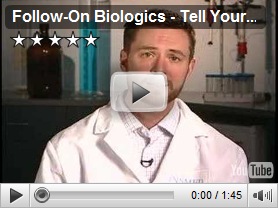 The IN VIVO Blog: Merck Bulks Up With Insmed FOB Acquisition