This seems to still be happening and it all comes back

to money.  This is pretty good as they even got a copy of an internal memo urging admitting more to the hospital.  As the discussion moves on people that are admitted when it is not needed get exposed to hospital acquired infections for one.  It amazes me they that this gets put in emails.  Over the years I have heard doctors verbally tell me that they have been in staff meetings where admissions are discussed and the fact that they need more.  When there are empty beds in the hospital they might be losing money so there’s the bottom line for the behavior.  Doctors all know when they hear this, it is all about money.  Business analytics give them the answers.  The software called Pro-Med is the used that is quoted as being part of the problem.  The parameters as described only seemed to need the chief complaint and few other details according to the discussion on this video.  This is wild as they even have copies of the reports with doctors not meeting their “admission 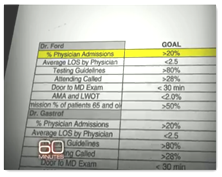 goals”.   Talk about algorithms that control from what is said here the programming was pretty wild with the pop up window that said “wait patient meets criteria for admitting” if they were not going to admit.  I used to create those popup up windows all the time and it can be done one of two ways, hard code it with programming access to the program or build a query builder user interface with permissions so users define the options at an administrative level.    I mention this as that will end up being part of the investigation process here as if it was hardcoded with programming assistance then there’s software company responsibility in this case and if not, then it was set by the admin users to operate in this fashion with the parameters they set.  On this topic with a related post and video I suggest take a look at the link below…lot of automation seems to be talking here…

Algorithms Are Taking Over the World…Automate This (Video)

Those talking here said the directions for this business operation came directly from the CEO. Algorithms move and make money as I say here all the time.   In this instance it sounds like it was adjusted based on occupancy to make money.  They hired a former FBI officer to work in compliance…if anyone were apt to see some of this, it would be him and he did.  HMA gave him a new job outside of compliance and then was fired.  I think FBI agents would have it in their blood to find fraud as well since this man has many years with them before going to work for HMA.

What a surprise the hospitals stopped using the software, so again I come back to those “algorithms for profit”..they are everywhere and we need clean math and clean code.  It will be interesting to see how the parameters of the program were fine tuned for admitting.  It could also have some involvement with a 3rd party consultant and “their suggested use” of the software too.  We are back to those 3rd party consultants again and you do have to go back to sales 101 to remember that part of the consultants sales pitch is to promise savings of a certain amount or percentage as that’s how they get in the door and being a promise, hospitals expect that amount of savings so they can create their budgets.   The methodologies depend on algorithms

to perform this function as all business run on some kind of IT infrastructure today and that’s why I tell everyone and that where to dig for your answers and not in drama queen type scenario, go for the numbers and make sure there’s not fraud and real value in them, so as not to be Algo Duped.  Here’s a related video from 2009 where the Texas Medical Association documenting the same issue.   In Texas at this hospital the goals were 16% so how does this issue keep creeping up all over the US and everyone denies it?  Algorithms move and make money and accuracy and ethics sometimes get lost in the processes.  BD