If you read here often enough then you know my tone here is to cut through some of the “stuff” we see out there as there’s no shortage on it.   I take case with this one that the title itself is strange.  It’s another study and as we all know there’s an abundance of those out there today and the same concept will be repeated over and over so when we read such items we assume that well gee we have seen this so many times in the press, it must be real or good information.  Not always the case and sometimes we end up with “subliminal marketing messages” that work to make money.  For years drug companies advertise like crazy, why, because it works and sells.  Case in point was this one and in the headlines to me, marketing and sales stood out clear and conflicts with itself in actual meaning.  Right off the bat the subliminal message here is 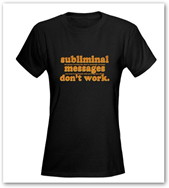 a negative that we are “sicker” but if that is the case why are we living longer?  It might have something to do with all scientific break throughs and treatments we have today and that’s a good thing but then, look at part two “unnecessarily sicker” where you get hit with the double whammy on sending the message that we are all sicker than we should be.  That’s not the case for everyone because they are not sicker and are under some great treatments plans and are doing better, so this is a message to make you feel bad and then secondly if you read the entire press release there’s this message to subliminally tell you to get out and “control” the world.  Education of course is always the best medicine and that’s what moves better care and gets patients motivated.  Selling analytics does nothing to motivate a patient.  (You can buy a shirt at this website)

“United Health Foundation's America's Health Rankings® Finds Americans Living Longer but Unnecessarily Sicker” Further along come all the stats that are cookie cutter formats in many press releases today and the templates out there even guide you in this direction to include these.  Next is the section where we hear from an expert with a couple quotes. Now in this one, the next section again worded to get attention tells you that we have “evil” people out there that are just to sedentary with their behavior.  You know at some point in time we all are perhaps too sedentary and that’s because we are people and are not perfect.  When you read this as a consumer, it’s now your fault as your couple days or longer periods of time are the root of the problem with the entire economy!  See how this works if you will.  Statements as such are useless and it’s blaming and finding fault rather than educating.  It goes on to quote more statistics and saying the same thing we have heard many times and now is telling you that you may live in an unhealthy area..you better start feeling bad about that now too and think about moving, that is if you can afford it:) And then we get to the sales pitch here to where you really should buy in to the fact that there’s tools for sale and use.  We all know this company mines and shares data and just a couple days ago the announcement came out that there’s a big interest in using social network data to analyze you, so jump to it and get that content out there for them to mine:)  They need to predict if you are one of the “bad guys” and gee just being a bit sedentary could be crime some day.  Here’s the link and a short quote below.

Do I care that I might live in a state that is not one of the healthiest..nope.  I do keep in mind that this is a non profit foundation here that is there to support a very big “for profit” conglomerate with subsidiaries galore.  Publications as such to me carry much more of a negative tone and while they may please shareholders as showing some form of action, one might just wonder how many of those shareholders are sedentary too:)  Can’t we keep things in context and have more of a true education focus instead of the negative programming here that makes you feel you a bit of sedentary time is what is at the root of the entire US economy?  When people are presented this type of material time and time again, it spreads in a negative fashion with influencing how we think over time.

Certainly we all want to do the right thing and be healthier but media like this that convinces us that we are like “evil twins” and that we are a “sicker” society and responsible for the over all economy just don’t do much and companies should look at what they put out there and encourage and not make people feel guilty and bad as that’s exactly what I see in this bit of marketing with the press release.  You can read the entire PR at the link below and gather your own thoughts but to me this negative rhetoric stands to actually do more harm than good, but again get out there and be sedentary and get that data out there on those social networks for them to mine as they want to predict exactly how sedentary you will be in the future even if you choose not to be and run and jog every day, and put nothing but fabrication on social networks (which many people do).  It’s that old risk factor coming back and the way it is used and interpreted and for more on that here’s another post that goes into how this takes place and sometimes there’s a lot of fiction on the other side of these risk factors.  As a different point of view after reading the link below you may not feel that your sedentary or partial sedentary lifestyle is the cause of the entire US economy problem and see why the  Institute for Research for Humanism in Medicine exists.  BD

Tuesday, December 11, 2012
My Commentaries , Other Items of Interest