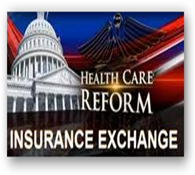 up their own, which some are doing?  Granted all the provisions from the government may or may not apply but what about the over all pricing?  I chatted with one doctor who was informed by Blue Cross that he has to “opt” out of his contract and compensation for those who buy their insurance via the California exchange would be a 30% drop in reimbursement compared to a normal commercial plan.  Of course as usual to protect companies and not individual consumers the patients who have insurance from an employer will not be paid at the 30% lower rate.

Here’s a private exchange owned by WellPoint for example and will the doctors who use “their exchanges” get paid less like the State of California exchange…yes indeed more good questions as the “poke in the fanny” contract annihilation continues.

This just seems kind of strange to allow the cost to be charged back to the consumer and right now it doesn’t sound like a big dollar amount but just adds more to the confusion of negotiating insurance contracts.  Frankly to me the more complex this all gets it leans toward a single payer plan as why is everything so complex?  Healthcare is definitely borrowing this methodology of complexity from Wall Street to keep everyone guessing.  By the time this is all done will there be much resemblance to the initial plan?  It seems like we are turning hospitals and doctors into technology centers that carry medical licenses!  BD

WASHINGTON — The Obama administration said Friday that it would charge insurance companies for the privilege of selling health insurance to millions of Americans in new online markets run by the federal government.

The cost of these “user fees” can be passed on to consumers. The proposed fees could add 3.5 percent to premiums for private health plans sold in insurance exchanges operated by the federal government. In a separate action, federal officials said that consumers would soon have access to nationwide health plans similar to those available to members of Congress and other federal employees. These plans will be offered by private insurance companies under contract with the United States Office of Personnel Management. The agency already provides insurance to eight million federal employees, retirees and dependents. Fees charged for use of the federal exchange come on top of a separate annual fee to be imposed on health insurance companies to help offset the cost of expanding coverage under the new law. The annual fees, to be apportioned among insurers according to their shares of the nation’s health insurance market, are expected to total $6 billion in 2014 and more than $100 billion over 10 years. http://www.nytimes.com/2012/12/01/health/health-insurers-will-be-charged-to-use-new-exchanges.html?_r=0