Home » My Commentaries » Need a Laugh » Other Items of Interest » Jon Stewart, A Nice “Intelligent” Interchange With The “Other New Jersey” Boss–Governor Christie, Insurance Exchanges and More… 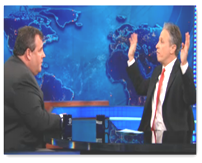 As we all have read the pregnancy in the UK ended up sadly with the nurse from the hospital committing suicide over the “prank” call performed by a couple DJs from Australia. It is a point to stop and think about folks in healthcare doing their jobs and what a feeling of not being effective or an error can do to a “human”…keep that word in check please I say as it’s devastating and can have horrible end results like this one.  This session of the Daily Show was done before this was announced and the show makes absolute fun of the press and I agree with this and proves the OMG and drama queen forces that drive so much of what we read today and it’s fun to laugh with him and the point is well made.  “how to sneak up a royal vagina”… from the “senior prenatal correspondent”, they hit some big nails on the head with a little touch of humor.  Moving forward on this episode though the conversation actually moves to much better discussion with Governor Christie of New Jersey and there’s humor there and we like that and Jon says this is the “other” boss and they talk about the Bruce Springsteen who is called the boss.  Both Christie and Stewart are both from New Jersey so a very good dialog, humor and makes some good points.  Christie might just really need his own party.  He digs in the to damage and disruption of lives in New Jersey due to Sandy.  Jon also nails him on his pre-storm comments and how it is today, what a difference a storm makes:)   Here’s the link to the entire show…and below is part one and two with the governor.

The Daily Show with Jon Stewart

Here’s a bonus video below part 3 with some real political conversations, the uncut version of what was part two above..  This is really a good exchange with some logical humor…”Jersey Love”… in my opinion the governor is letting the

feds take of the exchange as he has a lot of other items to attend to like rebuilding a flood damaged state and he does make some good points on the fact that the rules and requirements for Health Insurance exchanges are not laid out completely and frankly I’m watching that too.  Whether or not this entire insurance exchange provision is still applicable due to economic changes is really functional still remains a question in my mind, why?

Everyone has to figure out the Algorithms to run exchanges and negotiate with insurance companies and nobody likes that today.  It’s a “turkey shoot” with insurers coming to the table with full hand of “Loaded Business Intelligence Algorithms”…It seems like we are turning hospitals and doctors into technology centers that carry medical licenses!  Insurers have developed their own private exchanges too…

enough data makes sense here.  Here’s the link to the post and again as I say more should tune in to the power of the algorithms recognize what’s running things today, good video here to help explain as well as Algorithms are taking over the world and it’s your choice to recognize this or not.  I’m just here to point out some realities and add a little educational logic that seems to be missed almost everywhere else as I mentioned above, the Kate baby story is the perfect example…get those OMG and drama queen stories out there by all means:)

Christie says Washington does more to give Jon Stewart material for his show than he could every ask for and I agree with that as it is more material for this little blog too, but I only try to bring a lot of this up with my opinions when the sense of logic and reality get completely lost in other places in the media:)
Saturday, December 08, 2012
My Commentaries , Need a Laugh , Other Items of Interest