Proxense RFID and Encrypted Biometric Tracking for Hospitals and more…

Last week I had the opportunity to talk with Matt Davio from Proxense, a new RFID/Biometric solution provider. Their product line can not only track

assets, but also patients and clinicians. Proxense has it’s own server to work with present day EHR charting systems.

At the end of the post, there is an excellent video that goes though the entire process with some nice visuals of the processes at work.

Overall the company has 32 patents in place for it’s technology. The RFID tracking is using proprietary frequency. The company is also looking to partner with EHR vendors to enhance currently security. I asked about something I thought was similar a few years ago with a company that offered the ability to pay by biometric fingerprint and Matt told me this is not the same as the biometric information is stored and encrypted on the device and not stored on a server, as was the case with the other technology I had remembered.

St. Charles hospital in Bend, Oregon has signed on to serve a the beta testing facility for the entire network. Initially 3 components will be installed and 2 others added later. The small device, a PDK, (personal data key) which could be in several formats, a card, fob, etc. is called the PROX. It contains the encrypted information. If it is lost, nobody else can access the information as it is tied to your fingerprint. The chip is also secure, in other words, if it is in any way opened, the chip is broken, and useless to the hacker to obtain any encrypted information stored.

The PDK is battery operated. 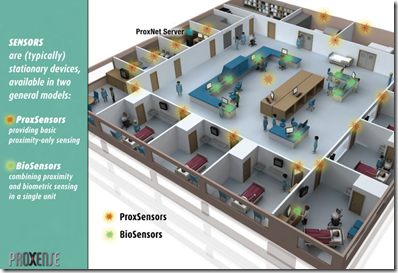 “The PROX holds ID information, medical records data, and more, and provide a simple and efficient interface for systems and records access. The product has many solutions somewhat built in to one system.”

First of all and probably of most interest to physicians is the solving of the “single sign” on issue. In other words when configured, the physician is automatically logged on to the system, no more having to remember all those passwords, just be in the proximity of the sensors.

Matt also informed me that there are also other uses outside of healthcare for the product, such as a contract recently secured with Bally. Soon, through the technology, we will have a “smart” slot machine that will remember your game preferences and recognize you when you approach the machine. In essence, Matt stated the technology of course has immediate use with healthcare, but is not limited to the industry and other variations are certainly open to discuss.

The solution sounds pretty solid as the Pentagon is also starting a beta project with Proxense in late summer or early fall, and we all know how important security is at the Pentagon. 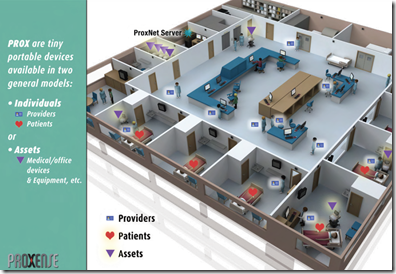 McKesson is the system used currently at the Bend, Oregon hospital and it require a small bit of modification to interface with ProxMed. Proxense is providing the bridgework for the EHR system through out the facilities. 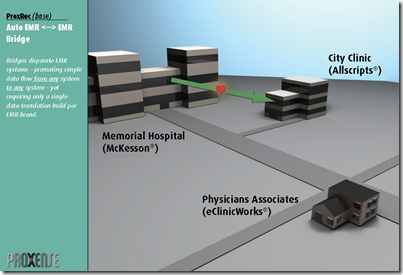 Additionally down the road, plans have been discussed to link with Allscripts and eClinicalWorks systems to handle connecting the ambulatory EHR systems in use at physicians' offices to the hospital. 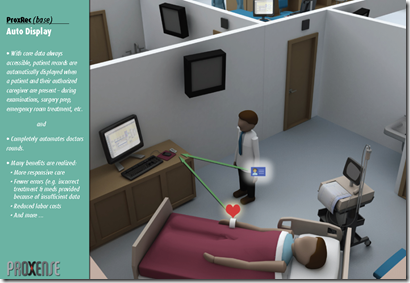 The auto display automatically pulls the correct chart and logs in the physician in the examining room, for example. This I would see as a huge times saver for the doctors not having to log in each time and also it would ensure the correct chart is on the screen. 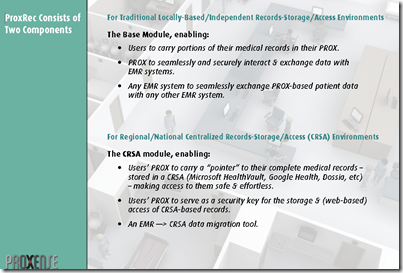 The Prox key can also serve as secure access for the patient to their PHR. One a patient is established, whether it be at the hospital or at one of the connected facilities, they are recognized throughout the entire system, so in other words, the biometric log on can be used in each facility, thus eliminating duplication of effort with writing and entering the same data at multiple healthcare facilities.

After speaking with Matt and learning about Proxense, it certainly appears the product stands to not only bridge information, but also add the desired security we all want with our medical records. For one, as a patient, I could certainly appreciate not having to fill in the same information over and over.

With the availability of recent tests for each patient from various facilities, this could also stand to cut down not only time in having the information, but the cost and inconvenience to the patient sometimes of manually having to take the information from one facility to another as well. Hopefully we will be hearing more on the progress being made with the product as it grows.

Thanks Matt for taking some time to explain Proxense and sharing some additional details on how the security, convenience, and PDKs all come together for very complete solution. BD 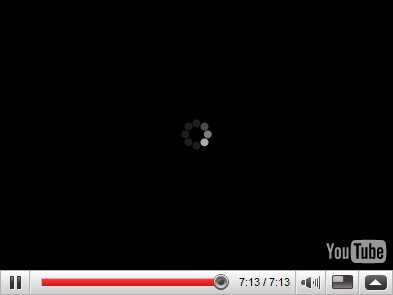