This is interesting and it has to do with not disclosing political contributions.  Aetna, although not as large as United has quite a few subsidiary companies under the main umbrella so where this took place could 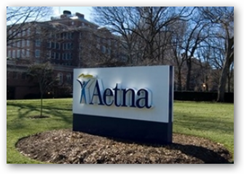 be at a subsidiary company.  Earlier this year the State of Connecticut as did the state of Minnesota did with United  raised concerns over the tax havens that are used overseas and the ones that are particularly popular and set up by the big 4 accounts in the US are located in the Netherlands.  This seems to be the place of choice due to technology available to run the Dutch Sandwich and divert profits to be shown on other books.  The documentary below, the Tax Free Ride explains how that works.  Aetna is said to use as many as eight different tax havens.

A federal lawsuit filed Tuesday accuses Aetna, its board of directors, and CEO Mark T. Bertolini of providing false and misleading information in its 2012 and 2013 proxy statements to shareholders.

The lawsuit says Aetna violated the Securities Exchange Act of 1934 by providing inaccurate information and omitting material regarding the company's political activities.

The lawsuit alleges that Aetna, using the proxy statements, persuaded shareholders to oppose proposals for greater clarity and transparency. The proposals were made by the Service Employees International Union Master Trust, SEIU, in 2012 and, separately, by the Unitarian Universalist Association of Congregations in 2013.

The suit was filed in U.S. District Court in New York, The plaintiff is Stephen W. Silberstein, an Aetna shareholder since July 1, 2003. Silberstein is represented by Citizens for Responsibility and Ethics in Washington, or CREW, a nonprofit legal watchdog group.

CREW said Aetna tried to hide nearly $8 million in contributions to the American Action Network and the U.S. Chamber of Commerce, both of which were active in influencing 2012 election.

A shareholder resolution proposed by SEIU in 2012 asked Aetna to disclose policies and procedures for making indirect political contributions and expenditures with corporate funds. The lawsuit alleges that Aetna recommended that shareholders vote against SEIU's proposal because the company publishes its Political Contributions and Related Activity Report on its website.