Home » Other Items of Interest » Century City Hospital In West LA To Get a New Life, A Rehab Hospital Investment For UCLA and Cedar Sinai Hospitals

Century City Hospital In West LA To Get a New Life, A Rehab Hospital Investment For UCLA and Cedar Sinai Hospitals 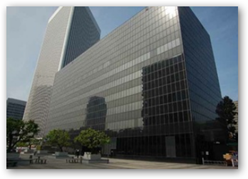 stars and if you saw the Bucket List, part of the movie were filmed there.  You can read back where the hospital went bankrupt in 2008 as the doctors that converted the hospital to it’s state of the art facility could not get any investors to keep it going.

Cedars Sinai and UCLA Medical Center along with a management company, Select Medical are all in on the deal.  There’s competition but not directly on the west LA side so this will be closer and it’s a darn nice facility and the top floors of the building still house doctors offices.

Between both hospitals there’s only 39 beds available so could almost guess they are probably full most of the time.  Both Cedars and UCLA compete and are not too far from each other but this is something they both need, and thus the venture.  BD

Two longtime rivals, Cedars-Sinai Medical Center and UCLA Health System, are teaming up to open a 138-bed rehabilitation hospital in Century City, reflecting both the growing need for this specialty care and the pressure on hospitals to control costs.

The unprecedented deal between two of the biggest names in Southern California healthcare is expected to be formally announced Tuesday. The two healthcare giants in West Los Angeles will jointly own the new hospital along with Select Medical Holdings Corp., a Pennsylvania healthcare company that runs rehabilitation facilities across the country.

The three partners say they plan to renovate the former Century City Hospital that has been closed for about four years and reopen it in late 2015. No financial terms were disclosed.

The new hospital is intended to serve the rising demand for inpatient rehabilitation for people suffering from strokes, spinal cord and brain injuries and other complex cases in Los Angeles and all along the West Coast.

The company has forged similar deals with academic medical centers in Texas and Pennsylvania. It also runs the well-known Kessler Institute for Rehabilitation in New Jersey, where the late actor Christopher Reeve received treatment.

Tuesday, December 03, 2013
Other Items of Interest