Bill Gates Lecture At The NIH: Why The Future Needs Biomedical Innovation

Lately Bill Gates is making the speaking and presentation rounds, and just spoke at 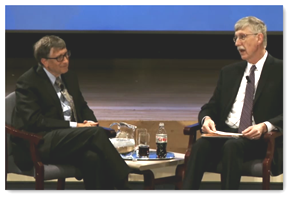 Harvard a few days ago.  He talks about what he learned from starting the Gates Foundation.  Every day, one child at a time he states is where the focus needs to be.  Vaccines are at the top of the list and he said the only reason we still have measles is that we don’t have enough distribution.

Polio is the biggest campaign right now at the Foundation and the goal is to eradicate by the year 2018.  GAVI, Global Alliance for Vaccines is one of the big organizations that does a lot of the footwork.   He moves on to talk about the irony that the money for research in the US is going down as he travels the world to look to get more money from other countries for Global Health.

After his summary he sits down with Francis Collins of the NIH for a short question and answer session.

Here’s the link as the NIH has issues with their embedding and the code doesn’t work and will tell you to allow java in your browser, even though you already have…more government bugs I guess.  BD

The David E. Barmes Global Health Lecture is the single most important named lecture at NIH on global health. This year's speaker is Bill Gates. The lecture series honors the late David Edward Barmes, special expert for international health at NIDCR. The lecture was established in 2001 to honor his lifelong dedication to 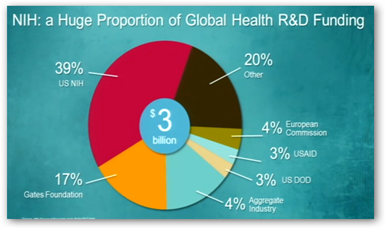 research aimed at improving health for people in low-income countries.
About Bill Gates: Known for his philanthropy, Mr. Gates advocates for research and innovation to help people live healthy and productive lives. He also is an outspoken supporter of federal investment in basic scientific research.
In 2000, he and his wife Melinda established the Bill & Melinda Gates Foundation to improve international public health through the development of vaccines, therapies, diagnostics, agricultural products, and other technologies.

The foundation partners with the private and public sectors to ensure that these technologies can be delivered successfully to the people who need them. In the United States, the Gates Foundation supports innovations that improve public education. To date, the Gates Foundation has invested $27.6 billion in grants.
The Gates Foundation also partners with the Foundation for the National Institutes of Health (FNIH) to support global health research. Through this collaboration, ongoing programs are studying diseases such as malaria, enteric infections, tuberculosis, and HIV/AIDS, as well as training researchers and medical personnel in the developing world.