Home » Medically Related » My Commentaries » Other Items of Interest » Technology » Senator Rockefeller Puts the Data Sellers on Notice–We Need to Index and License All Data Sellers to Include Banks, Insurers And Other Companies In Addition to the Data Brokers..

"Underbanked consumers"..who created that term, bankers of course.  You hit on one of my campaigns

and the poor are hit worse but everybody is getting it to include what's left of the middle class too.  It's not only the data brokers but gee you have banks making billions selling your data, Larry Ellison even said that we should worry about what banks and companies do first and put the NSA issue at #2.  Think of it, banks have 30 years of credit card data to sell and they are doing it, selling it to insurance companies, Blue Cross and United to name a couple.  You have heard it from me for two years here, Larry Ellison and now Senator Rockefeller about the data selling epidemic.

The excuse from Blue Cross was pretty wimpy as they said they get charge card records to monitor and see if any of their policy holders are starting to buy clothes a size larger so they can stay on top of obesity and rush out to get in your face; however, what if the receipts are not clothes for you, duh?  They use for every other kind of query of course and we know that.

nsurers Sell Tons of Data, Gets Flawed Data When Data Buyers Uses Out of Context Too

FTC has over 500 complaints on Clinical Trial recruiting company that is bugging the crap out of people with mismatched data...

It's an epidemic with easy money to be made and the buyers and sellers don't care if the data is bad as they have a free labor pool to fix it, us as we get stuck with no access if the data is wrong and have to fix it and they just keep on selling and making millions and billions, i.e. Walgreens make about a billion a year selling data so you figure out easily enough what banks are making..billions.  Here’s more on how MasterCard is getting ready to see how they can use more data to generate more fees…

until this is addressed as the two are connected.  It's because of the data selling easy money that privacy is so hard to come by.  Content of this post link below and a lot more has been sent by me to the FTC.

The players are not just limited to Acxiom, Experian, Epsilon, Reed Elsevier, Equifax, TransUnion, Rapleaf, Spokeo, and Datalogix.....we need an index and buying a license to sell data would accomplish that.  After all you need a license to drive a car, work at a doctor, sell stock, sell real estate,

do hair, nails, and so on.  This is one of the biggest rips hurting consumers and they can't see it, touch it or talk to it as the formulas and math models all run on server 24/7 and do the work as they are coded to do.

A couple years ago when the Occupy movement started, I said this is what it is all about, "The Attack of the Killer Algorithms" made possible by a lot of Algo Duping. I even have an Algo Duping page now with videos done by people smarter than me that are there to educate.

There's even a game looking for crowd funding to exploit how bad this is...video is pretty

good, play "Data Dealer", "buy and sell the medical records purchased from a disgruntled nurse, set up websites and scrape and mine data, break in to other data miners sites and steal their data, just build it and they will come, insurance companies, banks, and so on"...If you like the video, they have a demo game here…if the data selling epidemic was not so horrific, this game would not exist. 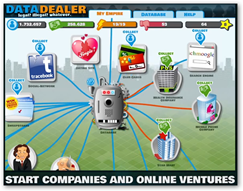 segmentation to design for inequality to grow..sadly it's all modeled that way and time for all to wake up to that fact, including government as they are behind this 8 ball all the time as we lose because of that.  This by the way is a big part of what keeps inequality going, it’s all math models and algorithms that execute.  And we are blessed with yet another algorithmic math illit with the consumer protection agency too, gave him a chance but so far other than a couple small battles, Cordray is a big fail as he wants to build data bases now and learn and we are stuck again with someone like this running the consumer finance agency. 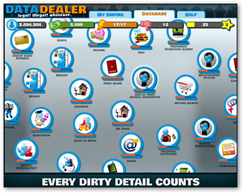 to be the biggest discriminatory attack on consumers, nothing like we have ever seen.

You cannot address any type of privacy or create any laws with teeth without an index and that would be a license…all proposed laws will fail miserable without it.  Scroll on down to my footer and watch the 4 videos that will bring you up to date on how the math and modelers do it all and that’s what runs on servers 24/7 making life impacting decisions about all of us with either flawed models or models that lie for the sake of profit with little or no concern about ethics or who gets the short end of the stick.  BD 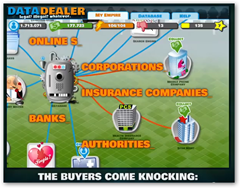 During a Wednesday hearing on the data broker industry, Rockefeller compared data brokers’ tracking of Americans to government surveillance of Americans, saying the latter is less concerning.

“The [National Security Agency] is so secure in its protection of privacy as compared to this group that we’re talking to, these data brokers,” he said. “It’s not even close.”