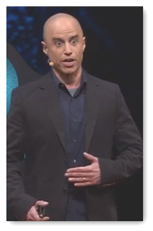 school and then talks about where he is today.  Before he went to Las Vegas, he was “Rap Doctor” in northern California.  You may know him as ZDoggMD, the rapping doctor.   He did a music video for Christmas and that was one of my favorites.

Feed The Wards Video From ZDoggMD–His Christmas Wish Granted-Not On Call This Year!

His sense of humor is great and he uses it well to make his point.  He said he had it all with the insane system in northern California or he could surrender and give up.  He gets into his story on how ZDoggMD came about.  He said what he did have was the fact that he was a doctor and could reach out and engage people.

He advice from his dad is really funny.  He finally met the CEO from Zappos who finally reached out to him after the doctor sending him a number of videos.  He brought Zappos to the city and needed to add healthcare and asked the ZDoggMD to move to Vegas and help him out.  Lots of funny enema talk through out the video.  He said that saying in the “doctor” system was turning him into a zombie.  He’s in the process of opening a wellness center about human relationships.  They are taking insurance out of the picture and making their care affordable.  I’m sure we will be getting some updates soon and he’s not alone with his efforts as there are others doing similar things but not as BiG, and not in Vegas!  BD

Here’s a couple more links, videos that he spoke about above…both are great..and he’s got a lot of talent and maybe he could go back to career choice number one, if he ever wanted to for sure.  BD

Hospitalists! (A Wicked Parody) And When to Become a Dog Whisperer…Videos