Well if you read here often enough you have heard this lecture for at least a couple years as folks that work with data, code, modeling see it ahead of time and I’m not the only one but maybe I just talk 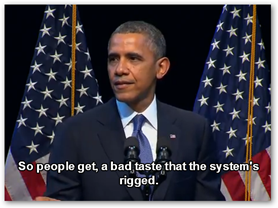 about it more.  I started out with the “Attack of the Killer Algorithms”, a series of blog posts and there were over 50 of them where I talked about every day events to where some code or algorithm running on a server hurt someone, flawed data is a bit part of it.

When the Occupy movement began, that was Chapter One of the Killer Algorithms as it was all about that and even the folks demonstrating didn’t understand the mathematics and models that create it, but recognizing something was wrong was enough and the Occupy Movement has even gone on to write a book about Alternative Banking and is still very much alive and well, but just not in the parks anymore for the most part.  You can read the book as I embedded it here.

Later on I put together a group of videos created by people smarter than me that worked in the financial environments and tell you first hand what’s going on, called “The Algo Duping Page” and I keep adding to it as I run across more videos that fit and where the layman can understand and in the footer of this blog are 4 of the videos included on that page, all four very much worth watching as you will learn.  I have had a couple comments from college professors stating the page was “brilliant” referring to the name (Algo Duping) and content.

You can’t address inequality without addressing what creates and keeps it building and that is what runs on servers 24/7 making life impacting decisions about all of us.  Here’s another great video from former DE Shaw Quant, Cathy O’Neill who used to do the math models a few years back for Larry Summers she pretty much thought he was kind of nuts but more more important is she described “the math” and “the models” that are created where the software follows.

This is what we have today as well with big data and those who may set aside ethics for profit and it’s out there.  Scroll on down to the footer and watch video #1 to see how you get duped.

This has  a lot to do with data selling which is an epidemic in the US and I guess the world for that matter and is also eating away at the stability of the economy as it’s out of hand and we need to license and excise tax all data sellers, banks companies, you name it as we are the free labor to fix all the errors they make with flawed data and many just sell to the highest bidder.  There’s not much focus on fixing flawed data after banks and companies have made their money selling us over and over.

So far on the data selling issues, FTC has been pretty darn useless and I write to them all the time about indexing (buying a license) to sell data and maintain a federal consumer look up site.  Richard Cordray is a lost fish in the sea too in that area as he doesn’t get the math modeling and is spending his time creating a data base so he can study and in the meantime he has a few very small victories as you can’t get the big ones for accountability unless you know what you are talking about.  DOJ Lanny proved that with “The Untouchables” 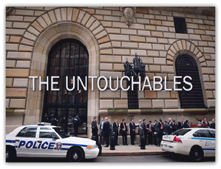 as every word and body movement reeked of sheer insecurity, you could see it.

Re-instate Glass-Steagall better than nothing but gives banks 5 more years of model creating and figure ways to beat around the verbiage of the law…but that’s what we get with a Congress that has no clue on how math models all work and effect the economy and all of us…low tech band aids for high tech problems, and so inequality continues to grow.  If you don’t think that is true, then watch the Quant video below…

This is another documentary out and this one is extremely interesting when you find out what “code” is running on the exchange servers…it is rigged as he was a high frequency company/trader and even he could not break the code on the exchanges and was ripped.  There will be more on this one as it develops.

So if we are to tackle inequality, this is the direction we need to go as it’s way above the head of most and as the President said, we can’t afford lawyers and other tech or other assets to protect ourselves when the technology cards are stacked against us.  The Quant documentary is always in the footer of my blog and also over at the Algo Duping page and I urge all of you to watch and listen as this is the real thing happening here, code on servers with models that lie and some that just guess as the #1 Quant in the world, Paul Wilmott tells us “we will just choose six”..he says and that’s a quote.

Quants of Wall Street the Documentary (aka Data Scientists)

Best quote of the entire documentary is “you can do anything with software” by Mike Osinski who wrote the sub prime software that everyone used and abused and remodeled.  When you get to the end that’s where he speaks..”you make what you want a virtual world with software”…”with software you can do something about everything”…”software is a lot more mental exertion is intense”…

And when it comes to health insurance if you have stayed with me this long..same thing, different algorithms…as you have been watching all the clashing algorithms the last few weeks with the web site, policy cancellations and so on.

Not ObamaCare That is Failing, It’s the Models and Subsequent Algorithms that Execute Within IT Infrastructures Intersecting, Changing And Conflicting– The Affordable

I don’t know why government refuses to learn and it might be this Plos One study that has the answer that says the fear of math gives people real physical pain…more I think about it and the more I see I think they are right.  Government won’t hire data sleuths and quants from the other side to help them..link below…and Cathy O’Neill who’s referenced above and who’s video in the footer of this blog tried to go to work for the SEC.. you can hear her say so..nobody listening..  all bliss and afraid of math…at the SEC.

Bottom line if we are truly going to get beyond lip service and tackle inequality, we need to look at math model accountability, banks open the code, not just the books..as with all the breaks and bail outs received I see nothing wrong with the government wanting to see your math models so we can get things cleaned up, same goes for a lot of corporations as well.  Time to put away those corporate algorithm balls that keep the inequality wheels rolling.

This is also why current executive heads will also fail us that are in place right now as we have seen with Sebelius as you need more powerful folks running those agencies today that can keep pace with insurance companies and their quants as well as the hedge funds and banks with their quant models.   If I hear anymore without replacing some of these folks running government agencies,  then I guess I’ll just write it off to lip service because they can’t do battle without the right tools, like taking a sling shot to gun battles.  There’s nothing personal about it at all, just wrong people in the wrong jobs and we need “smart folks” in there who don’t have the fear of math and who understand how math models and algorithms work to keep inequality rolling.  BD

Wednesday, December 04, 2013
My Commentaries , Other Items of Interest , Technology