Home » Medically Related » Other Items of Interest » Technology » Seven More Researchers Become Millionaires at the 2014 Breakthrough Prize Awards Held In Silicon Valley, $21 Million Total Given to Scientists To Spend and Use As They Wish

Seven More Researchers Become Millionaires at the 2014 Breakthrough Prize Awards Held In Silicon Valley, $21 Million Total Given to Scientists To Spend and Use As They Wish

You may or may not remember from last year when the “Breakthrough Prize” was created.  This year there was a big ceremony and big party unlike last year where the initial awards 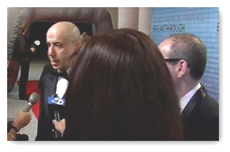 kind of came out of nowhere.  Many of the recipients from last year were very surprised and many took some of the money to help educate their kids and basically turned the rest back into their research projects, which is by all means a noble gesture for sure.  Here’s the story from last year.

Below you can read more from the press release on who won and in what categories.  Next year, well guess what a new category for “math”…and we won’t find any of these folks in there I’m sure that experience physical pain when presented with math issues:)  Those fears are alive and well in government today big time.

“Algo Duping” – Plos one Journal Publication Explains Why The Fear of Math Plays a Big Role As One Underlying Reason We All Get Duped And Those Who Don’t Fear Math Take All the Money, Gradually, Using “Mathematical Formulas & Algorithms”

Kevin spacey was the host and Conan was there as well.  Well they can all afford the big party expense, that’s for sure  and where is this going to leave the Nobel prize one could ask?  More money in this one and actually the winners and the reasoning is better I do have to say that as the Nobel folks are not known for being technologists but address ethics very well, so why don’t the two work together?  Probably won’t see that as Silicon Valley wants to control all with software and code.    BD

SAN FRANCISCO, Dec. 13, 2013 -- /PRNewswire/ -- The names of the 2014 Breakthrough Prize winners in Fundamental Physics and Life Sciences were unveiled at an exclusive ceremony at the NASA Ames Research Center, Mountain View, CA. At a total awarded amount of $21 million, sponsored by Sergey Brin & Anne Wojcicki, Jack Ma & Cathy Zhang, Yuri & Julia Milner and Mark Zuckerberg & Priscilla Chan, the prizes aim to celebrate scientists and generate excitement about the pursuit of science as a career.

The Breakthrough Prize in Fundamental Physics recognizes transformative achievements in the field of fundamental physics, with a special focus on recent developments. The 2014 winners are:

The Breakthrough Prize in Life Sciences recognizes excellence in research aimed at curing intractable diseases and extending human life. The 2014 recipients are:

"Scientists should be celebrated as heroes, and we are honored to be part of today's celebration of the newest winners of the Breakthrough Prize in Life Sciences and the Fundamental Physics Prize," said Anne Wojcicki and Sergey Brin.

At the end of the ceremony, Mark Zuckerberg and Yuri Milner announced the launch of a new $3 million Breakthrough Prize in Mathematics. The details of the new prize will be announced at a later date.

Additional information on the Breakthrough Prizes is available at: