Home » Medically Related » Technology » Amazon Drones Delivering Your Product, Life Saving Medical Devices and Supplies Could Be The Proof of Concept and Delivery System Amazon And The Rest of Us Are Looking For (Video)

Amazon Drones Delivering Your Product, Life Saving Medical Devices and Supplies Could Be The Proof of Concept and Delivery System Amazon And The Rest of Us Are Looking For (Video) 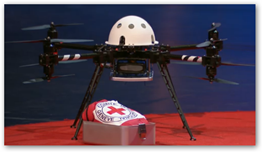 By now you probably saw the 60 Minute report on what Amazon has on the agenda for delivery of products purchased.  There’s also a lot of work going on with drones in healthcare, so this idea is not new overall.   This is a good lecture and you see the drone land right on the stage.

Interesting how low the cost of getting supplied there is 24 cents.  This is a little beyond where Amazon is with setting up stations and drones that will be able to go further than the 10 miles that Amazon is aiming for.  It will be interesting to see what the FAA does with all of this.   How many drones will we have flying around out there.

Once the medical part gets going, Amazon could build on it, or who knows maybe they are working on it already as the CEO said they have a lot of stuff in the works they can’t discuss.  I look for maybe some of this to get started over seas maybe before here in the US.

There is actually a start up company called “Matternet” and you can read more here about what they are doing.  The company actually did a trail run in Haiti after the earthquake in 2010.  Matternet goes a little further with having stations set up for the drones.  Video below shows the trial run, and like CEO Jeff Bezos said on 60 Minutes there’s more work to be done here as you don’t want the drone landing on your head.

We may have an entire new ecosystem developing for both medical deliveries and those items purchased on Amazon and of course Amazon sells medical devices and other related supplies as well so maybe the two will be intersecting at some time.  BD

A billion people in the world lack access to all-season roads. Could the structure of the internet provide

a model for how to reach them? Andreas Raptopoulos of Matternet thinks so.  He introduces a new type of transportation system that uses electric autonomous flying machines to deliver medicine, food, goods and supplies wherever they are needed.

Andreas Raptopoulos and his colleagues are building the flying internet of things, using drones to carry essential goods to otherwise inaccessible areas.