Home » Medically Related » Other Items of Interest » Technology » Complexity Wins–Meaningful Use Gets an Extension, Fewer Doctors and Hospitals Will Face Digital Suicide Measures With More Time To Meet Their Goals..

Complexity Wins–Meaningful Use Gets an Extension, Fewer Doctors and Hospitals Will Face Digital Suicide Measures With More Time To Meet Their Goals..

Well it’s finally here and for good reason.  You might be living under a rock today to think that the CIOs and other digital officers of hospitals have not been under enough pressure so some breathing room here, and for doctors as well.  Perhaps it was Healthcare.Gov that opened some eyes with some 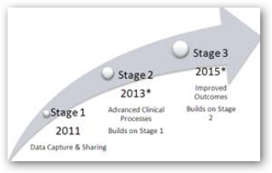 coming out of out the bliss and seeing how complex things are out there today.  You just can’t do it all and timelines need to be adjusted for technology advances and I should add in failures too as they show up here and there.

Part of the issues here too are patient involvement as complexities are in there too, plus the fact that we don’t trust a lot out there anymore with everyone wanting to sell our data, even Mayo and United are like doing commercials to get more data to sell so they can make more money.  Right now too with all the focus on Obamacare and getting insurance, something else that is taking priority with patients as well.

I had been speaking with some doctors as well and many told me they were about ready to give up on step 2 as it was too much to meet every goal as spelled out.  I’m sure with state 3 that will have several changes as it evolves as you set the policy one year and it won’t work the next year, it is what it is out there.  We are even having failures with “certified systems” out there too, like the subsidiary of Untied Healthcare, Picis who has to recall their software.

Everywhere you were reading there were concerns over Meaningful Use Two out there and by some very big experts like Dr. Halamka at Harvard, who says he’s not going to be very popular with all he has on his plate and he’s not alone with many CIOs out there in the same boat.  Shoot there’s also such a very small number of medical records vendors who are certified for Stage 2 so they need more time too.

You can read the details below and visit Modern Healthcare at the link for the rest of the details.  BD

The CMS is giving providers another year to show they’ve met the Stage 2 criteria of the federal government’s incentive program to encourage the adoption and meaningful use of electronic health records. That means the start of the next phase will be pushed back a year.
Stage 2 will be extended through 2016 and Stage 3 won’t begin until at least fiscal year 2017 for hospitals and calendar year 2017 for physicians and other eligible professionals that have by then completed at least two years at Stage 2, the CMS said Friday.


The latest extension parallels what the feds did with Stage 1, which was originally set to last two years but was lengthened by a year when it appeared the industry would be overstretched to build and get acclimated to systems capable of meeting the federal payment program’s more stringent Stage 2 criteria.

The start of Stage 2 was Oct. 1 this year for those hospitals that have already met Stage 1 criteria for at least the prior two years. For physicians and other “eligible professionals,” the clock starts for Stage 2 on Jan. 1, 2014. A separate rule extending Stage 2 by a year is expected sooner and will be grafted onto another, as yet an unspecified HHS rule already started on the lengthy rule-making process, according to the CMS.

In another effort to address that lag, the CMS proposed a new, “voluntary” set of health IT system testing and certification criteria to be called the 2015 Edition. The current 2014 Edition of testing and certification criteria will remain “the baseline” for vendors and developers, but the 2015 Edition criteria would “be responsive to stakeholder feedback, address issues found in the 2014 Edition, and would reference updated standards and implementation guides that we expect would continue momentum toward greater interoperability,” the statement said. The 2015 Edition would be voluntary in that neither vendors nor providers would be required to create or use the updated technology.