This is sad, one more of the Gibbs brothers with health problems and this one is a big on.  Several performances have been cancelled as a result and two other members of the group have already passed away, Maurice at at 53 and Andy Gibb with drug problems.  Sad to say but the picture kind of tells a story that something is not right just by appearance.  BD 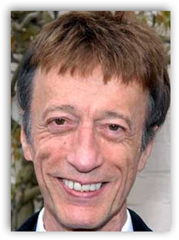 Robin Gibb, one of the two surviving members of the Bee Gees, is suffering from liver cancer and was rushed to the hospital several days ago via ambulance after his family called 999 -- the British  equivalent of 911 -- for treatment.

Gibb, 61, was diagnosed with liver cancer several months ago, according to the Sunday Mirror, which reported that older brother Barry, 65, his wife, Linda, and mother Barbara Gibb, 91, had flown in from their homes in the U.S. to be with Robin.

Robin Gibb was allowed to return home Tuesday after spending five hours in the hospital; he said later in a statement that he had been treated for inflammation of the colon, the Sun reported. The always-slim singer, who has appeared gaunt in recent months, has had to cancel a number of appearances this year.