This is about as low as it gets!  I can see today how this happened as sometimes even writing this blog, I feel like I am writing Sci-Fi at times.  What is bad is when you read through here and the company put the folks who were suckered in on an “official idiot list”.  Three sales representatives for FBK Products LLC now face prison time. 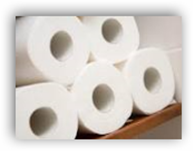 They had this one going with “laws that regulate toilet paper” and septic tanks required this and that the tanks would not meet federal inspection standards, ok so when’s the last time an official from the government come out to inspect?  They don’t but sad that these folks got away with this scam with stating this special toilet paper would eliminate septic sludge and that the tanks would not have to be pumped!  It’s sad to see folks take advantage of seniors this way.  I wonder how much they made off this racket. Do you believe everything you are told today?

You would be surprised how naïve and gullible we are when presented with statistics and reports today.  Take a listen to this broadcast at the link below and see if you have been suckered in with number and stats of late as they do market us like crazy today.  BD

(Reuters) - Florida scam artists told elderly victims the government had changed the laws regulating toilet paper and that their septic tanks would be ruined unless they bought specially formulated rolls, court documents said.

"Through this scheme, some elderly customers were defrauded into purchasing more than 70 years worth of toilet paper," federal prosecutors in Miami said in a news release.

Three defendants pleaded guilty this week to charges of conspiring to commit wire fraud, part of what prosecutors said was a $1 million scheme to sell unnecessary septic tank products.

They admitted that in phone calls targeting elderly people with septic tanks, they falsely claimed their company was the only one licensed by the Environmental Protection Agency to sell a $199 "Septic Remedy" that would eliminate septic sludge and make it unnecessary to pump out the tanks.

Those who bought the product were placed on an "idiot list" for follow-up sales, court documents said.