The endovascular stapling system already has the European CE mark of approval and it will work with many of the stents from Medtronic, Cook and others.  The staples achieve the equivalent of hand sewn stitches so I can see where this would make the procedures go faster.  Last year Cook received FDA approval for their Zenith Leg Graft,  for use with abdominal Aortic aneurysms.

Clinical studies done in hospitals showed no issues or problems with the staple procedure.  BD 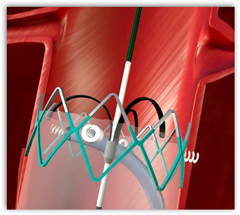 (FDA) for the Aptus EndoStapling System, which will now be known as the HeliFX™ Aortic Securement System. The innovative helical anchor technology enables independent endograft fixation, and is designed to mimic the hand suturing performed during open surgical repair of abdominal aortic aneurysms (AAA). Aortic aneurysms are an enlarged and weakened section of the aorta, the main artery carrying blood from the heart, which can be lethal if left untreated. Each year, an estimated 200,000 people in the U.S. and 100,000 people in Europe are diagnosed with AAA. In EVAR, an alternative to open surgical repair of AAA, a minimally invasive catheter-based system is used to implant a metal and fabric endograft to isolate blood flow away from the aneurysm to prevent potential rupture and death. 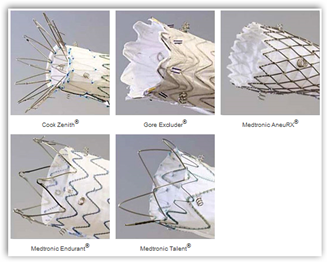 The HeliFX System provides physicians with a novel technology to repair endovascular grafts that have migrated away from the implant site, have developed endoleaks or are at risk of developing these complications, which are commonly seen after EVAR. In such cases, augmented fixation and/or sealing is required to regain or maintain effective aneurysm exclusion. The system also can be used during de novo (initial) EVAR procedures to enhance an endograft’s inherent fixation and sealing mechanisms.