First of all, hats off to 60 Minutes for their coverage on this issue, which I wrote up back in June of this year.  Why should lawmakers be immune to the laws that the rest of us have to abide by? 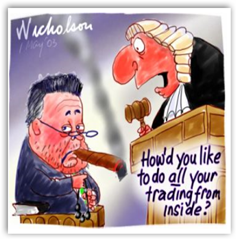 When you watch further into the video, healthcare has been a profitable area for those investing in stock in Congress.  Congressional lawmakers have no corporate responsibilities.  Healthcare stocks during the healthcare law were traded like crazy.  They would actually confiscate cell phones during meetings with the Fed Chairman.

Mentioned here is John Boehner who during the healthcare bill era, and just days before the defeat of the public option he bought a ton of health insurance stock.

60 Minutes was right on it with getting him in a press conference.  Later they found out the trades were done by his financial office advisor.  Real estate is another area mentioned here where members of Congress have cashed in.  Federal judges don’t get this option.

Nobody wants to pass the STOCK act…watch them ask members of Congress.  Motley Fool and others have had movements promoting the passage of this law that would make the same rules apply to Congress do the rest of us.  Political Intelligence is new business now that operates in Washington that collects non public information and sells it to Hedge Funds…is this fair??  BD