One of the riskiest components of a pacemaker are the leads, the series of wires led through key veins into the heart and then connected to electrodes to control the

pacemaker itself. This complicated surgery brings a high level of additional risk.  The leads are also suspected to be one of pacemakers’ critical failure points.  This problem has been addressed with the WiCS system of Wireless Cardiac Stimulation.

Below are a couple of images that first show a conventional situation  and the second image shows just the pacemaker with the wireless electrode.  This is pretty interesting, an internal wireless system inside your body.  It converts mechanical energy into electrical energy, wirelessly transmitted from an ultrasonic pulse generator and this

is how the heart is paced.  As long as the wireless signal works it looks to be a bit safer to me but I am not a cardiologist.

Clinical trials are taking place now in Europe to see how it works and if the leadless system is safer and benefits the patient.  BD 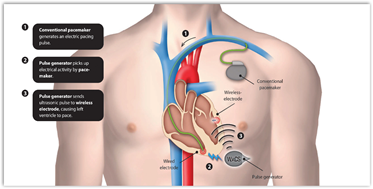 This is how it appears with the wireless electrode. 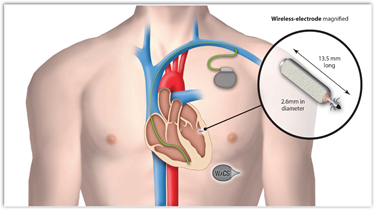 Eliminating the lead in the left side of the heart presents a major breakthrough in pacemaker design, and brings new hope for over 2.2 million advanced heart failure patients worldwide, who can benefit from CRT therapy. It also provides a life-saving option for those patients who do not benefit from CRT therapy, either because of the complexity of the procedure, or the limitations of the current technology.

WiCS is the first leadless system to be successfully implanted in early human clinical trials at leading centers in Europe. This platform technology will ultimately eliminate all pacing leads and deliver superior cardiac pacing therapy through its flexibility in where the electrode can be placed.

Current CRT pacemakers or defibrillators are implanted in patients with chronic heart failure requiring both the left and right ventricles to be paced. Such devices require the implantation of three leads into the heart, one of which involves painstakingly threading a lead through a difficult and complex route running from the right atrium of the heart, out of the heart and into the coronary sinus, a vasculature structure on the outside surface of the heart to the left ventricle. A pacemaker/defibrillator device is connected to the leads which are used to sense heart activity and to deliver electrical stimulation through electrodes at the end of the leads.  The electrical stimulation applied to the right and to the left ventricles synchronizes the heart’s contraction in a way that improves overall cardiac function in heart failure patients. However, added to the difficulty of the procedure itself is the chance of lead failure and infection.

WiCS overcomes these problems by leveraging advances in energy harvesting microelectronics. A very small leadless electrode, is implanted in the desired location within the left side of the heart. In its first generation, WiCS works in conjunction with a conventional pacemaker/defibrillator, sensing the electrical pacing pulse of the pacemaker from the right ventricle. The pulse generator then transmits an ultrasonic pulse to the implanted receiver, which converts the sonic energy into electrical energy to pace the left ventricle in synchronicity with the right. Not only does this reduce the need for the difficult and complicated surgery associated with CRT pacemakers, but by pacing inside the left ventricle it also better mimics the natural activation and mechanical contraction pattern of the heart.

With hospital resources already stretched, the leadless system significantly reduces the time taken to carry out the complicated procedure which requires threading the lead through the coronary sinus vein to the left ventricle of the heart. The WiCS procedure is simple and predictable, resulting in streamlined scheduling of operating theaters and cost savings.

The innovative technology was developed in conjunction with leading design and development firm Cambridge Consultants. Using its deep knowledge of integrated circuit (IC) design, Cambridge Consultants helped EBR define the system architecture which could be realized with modern silicon chip technology.  Power consumption, size and safety are critical in pacemaker applications, and the team at Cambridge Consultants developed advanced low-power circuits to interface with the ultrasonic transducers and heart monitoring sensors.  With reliability critical, coupled with the need for sophisticated signal processing, Cambridge Consultants created two state-of-the-art mixed-signal Application-Specific Integrated Circuits managed by its powerful XAP4 processor to form the core of the WiCS pacing system. During the development, Cambridge Consultants created a full system hardware emulator of the final ASIC so that the other system elements and the software could be designed and fully tested over a year before prototype ASICs were available.  This approach dramatically reduced the overall time of the development and enabled EBR to ensure that the system would work as envisaged before committing to the costly and time-consuming manufacture of final product.

Allan Will, CEO of EBR Systems, commented, “The WiCS system represents a huge breakthrough in pacemaker technology, not only in how we treat chronic heart failure patients today, but in eliminating leads and enabling site selected pacing locations in the heart for a wide variety of cardiac pacing applications.  Many of the complications and reliability failures of pacemaker systems are attributed to leads.  By eliminating leads, we can address the problems which come with them, and advance cardiac pacing therapy for all patients.”

“We are pleased to be able to contribute to such an important breakthrough in medical technology,” said Andrew Diston, Head of Global Medical Technology at Cambridge Consultants.  “We have a long history of championing cutting edge technology, and enabling start-ups to bring their groundbreaking concepts to market. We look forward to following this potentially lifesaving technology as it revolutionizes the market.”

EBR’s wireless pacing technology (WiCS) was developed to eliminate cardiac pacing leads, historically an impediment to efficacy and major source of complications and reliability issues. The initial product application addresses an important underserved need in the heart failure population. EBR’s WiCS technology provides an elegant solution for many heart failure patients indicated for CRT therapy including patients implanted with an existing pacemaker or defibrillator who would benefit from upgrading their therapy, patients denied therapy with failed attempts to implant a CS lead, patients with chronically failed CS leads and the 30% of patients annually classified as non- or marginal responders. Ultimately, EBR’s wireless pacing technology has the potential to replace all cardiac pacing leads, in bradycardia and heart failure therapy.


Cambridge Consultants develops breakthrough products, creates and licenses intellectual property, and provides business consultancy in technology critical issues for clients worldwide. For 50 years, the company has been helping its clients turn business opportunities into commercial successes, whether they are launching first-to-market products, entering new markets or expanding existing markets through the introduction of new technologies. With a team of over 300 engineers, designers, scientists and consultants, in offices in Cambridge (UK) and Boston (USA), Cambridge Consultants offers solutions across a diverse range of industries including medical technology, industrial and consumer products, transport, energy, cleantech and wireless communications. For more information visit: www.cambridgeconsultants.com