Home » Medically Related » Other Items of Interest » Technology » Hospital Janitor Removes Hospital Medical Records From Locked Shredding Bins and Sells them to a Milwaukee Street Gang-Patient Sues and Has to Pay the Hospital Legal Fees?

Hospital Janitor Removes Hospital Medical Records From Locked Shredding Bins and Sells them to a Milwaukee Street Gang-Patient Sues and Has to Pay the Hospital Legal Fees?

Just a few days ago there was a survey with patients thinking paper records were more secure, well think again, especially in this case where you have a janitor employee of the hospital making the rounds and grabbing up paper charts! 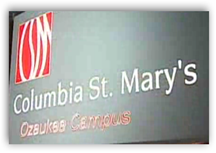 This actually happened 4 years ago when there were no requirements to report the breach so some patients are now just finding out about the theft!  The janitor even had some disciplinary problems on his record as well.  Now this takes a weird turn here with a judge ordering the family suing for damages to pay the hospital $30,000 for the cost of the lawsuit, huh?  Now how does that happen?  30 patients all together were affected and the theft went on for 8 months.  This one is very strange indeed.  You can watch the video here to see the whole story. A man is in having surgery and his identity was being sold to street gangs at the same time.  BD

MILWAUKEE -- Medical records may be thought of as highly private, secure data. But four years after 12 News shed light on a breach at a Milwaukee area hospital, court documents show just how unsecure those records truly were.

Four years ago, Geno Sellers' father went to St. Mary's Ozaukee hospital for a heart procedure his family hoped would save his live.

A few months after his father's passed away, Sellers discovered the identity of his dad had been stolen by a Milwaukee street gang.

"A couple of months after his passing ... to be notified that not only did your dad suffer -- he passed away -- now when he was alive his identity was stolen?" Sellers said.

Investigators said a janitor fed patient records to gang members. The lead investigator said a sworn statement that a janitor had access to a master key that opened most every room in the building, even though he had been a discipline problem.

While the sting turned up 30 patient records, the lead investigator on the case told 12 News it's not clear exactly how many patient records were stolen during the eight months they believe the scheme went on.

No criminal charges were filed against the suspects, which is what prompted Sellers to come forward to warn other families.

"I'm disappointed that the ones who are the policy makers within the hospital administration won't step forward and take responsibility and say 'hey we got it wrong,'" he said.