This was a very unique agreement between the union and the California Hospital Association and both got something out of the deal and the biggest item was both parties uniting to lobby for an additional $6 Billion from the State for Medi-Cal reimbursement, and that’s a big on so it was worth it for both parties to put their other issues aside for that to include the union 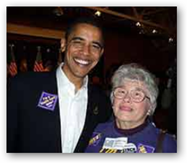 The hospitals in agreement with the union have now agreed to make it easier for the union to organize thousands of workers and that too is a big battle now that has been put aside.  So now the issue are the hospitals holding out, Cedars, Providence and Prime.  Providence runs 6 hospitals in California and Prime has a few more in California and also operates hospitals in other states.  Well let’s see if this campaign shames any of the hold outs into the code of conduct agreement.  Nobody’s getting everything they want with the hospitals and the union but it’s better than the battle as there’s enough other items out there that folks are having issues with that mean a lot of money.  The hospitals can use the help lobbying though for the Medi-Cal and the union seemed to be aware of this.  BD

Shortly after reaching a truce with much of the hospital industry last month, California's largest healthcare union vowed to step up its criticism of Cedars-Sinai Medical Center and two hospital chains that balked at the agreement.

On an internal conference call leaked to the media, a leader of the Service Employees International Union lashed out at the three holdouts and talked about using the new deal to bring them "to heel."

The recording disclosed some information not previously made public. It also showed the animosity that still exists and how fragile this partnership may be — despite the fanfare with which the deal was announced.

Under the agreement, the California Hospital Assn. and a majority of the state's 430 hospitals approved a new "code of conduct" to make it easier for the union to organize thousands of workers. The agreement aims to eliminate the negative campaigning and bitter attacks between these longtime adversaries.

The union and hospital group had also refused to identify participating hospitals. But Regan singled out Cedars-Sinai, Prime Healthcare Services Inc. and the Providence Health & Services hospital chain as the top three "bad actors" who didn't sign on.

In return for greater access to workers, SEIU will help hospitals lobby for an additional $6 billion from the state in annual Medi-Cal reimbursement, which the union says could free up more money for wages and benefits.