I haven’t heard Orion mentioned in a while but here’s a couple back links below to where they first of all bought the former Microsoft Amalga HIE technologies a few years ago.  In addition, Caradigm company was created with join 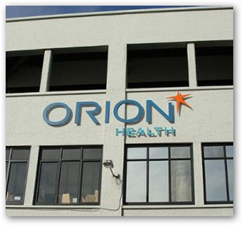 t efforts of both Microsoft and GE and it would make sense they are affiliated with Orion as well.

For the first time in years Sutter posted a loss for the year 2013  and formed a new HMO signature plan that is run by a former Optum Executive, and Sutter has been a long time user of Ingenix (now Optum Insights)business intelligence software.   I guess the ACA might be having some effect here as well.  Hospital inequality today is something few care to discuss it seems but Sutter has always been at the top as far as quality and expense for patients as well.

Orion Health and Caradigm to Expand Upon Orion EHR, Business Intelligence & Apps,–Some of the Technologies Formerly Known as Amalga HIS

Data sharing is always good news as we know it means better care when more information and records are available to doctors so they can see the big picture.  Tens of millions of dollars is to be spent for this project and Sutter is using an Epic system in their hospitals.  There’s no way of course to put a specific cost number on the project as there’s always incidentals that arise anymore with large projects as we have seen with insurance exchanges in the recent past.  In addition the system will connect with the CIE network for even more connectivity.  You do wonder at times how sustainable systems synchronizing records will be down the road as it’s not cheap at all.

Currently 17 hospitals are connected with some physician’s offices and I would assume they are also using an Epic medical records system.  It’s going to be interesting as new HIE models have recently become available that are legacy Ok and connect any type of hospital system to another and also the doctors on staff such as the one at the link below.  Everyone talks about HIE and the cost so time will tell.  The Zoeticx (link below)  system works off of system APIs and doesn’t require a constant connection and there’s no warehousing, so again this will be interesting to see how the Orion project moves along and the main thing of course is to just the records connected.  BD

Sutter Health, the Sacramento-based nonprofit system that runs many of the Bay Area's biggest hospitals, plans to spend "tens of millions of dollars" to create a health care data platform to share information between Sutter clinicians and unaffiliated health care providers in Northern California.

Sutter will work with Australia's Orion Health to build and deploy the so-called "HIE" or health information exchange by May 2015, officials say.

Work on the new system will begin this summer.

Sy Nielson, a Sutter spokesman, said Sutter would spend tens of millions of dollars on the new technology, but wouldn't specify an exact number.