Home » Medically Related » Other Items of Interest » Technology » VA Has Large Number of Potential VistA Scheduler Replacements (30) Available To Evaluate Thanks to the Challenge Post The VA Held Last Year to Design a New Module..

VA Has Large Number of Potential VistA Scheduler Replacements (30) Available To Evaluate Thanks to the Challenge Post The VA Held Last Year to Design a New Module..

Last year the VA held a contest to develop a new scheduling module for the VistA medical records system, and in view of where the VA is today, this was not done too soon.  I have also read where the VA is also going t solicit bids for a scheduler replacement.  Why not look at what was created in the contest and see if there’s some good useable code there? 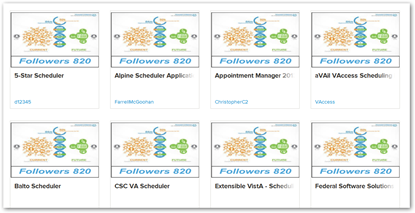 There were over  $3 Million given away in prizes so for for that price tag and awards, yeah let’s look and see what was written by both the winners and non winners.

“To encourage development of systems that help Veterans schedule appointments to receive care from the Veterans Health Administration and to reduce risks in the future procurement and deployment of those systems, the Secretary of Veterans Affairs (VA) announces a prize contest under Section 105 of the America COMPETES Reauthorization Act of 2011, Public Law 111-358 (2011), 15 USC 3719 (the “Act”).

The goal of this contest is to encourage creation of systems that help Veterans make appointments to receive outpatient and ambulatory care[1] from the Veterans Health Administration.  VA also seeks to obtain information which will allow it to reduce the risks inherent in procurement and deployment of a replacement medical scheduling product.”

Who knows there might be a great module that may need some final tweaking and refinement before compiling that might be some pretty good stuff.  The scheduling modules were all written in Open Source code.  Here’s a few lines from the rules below and yes it specifies the VA can choose license any of the scheduler modules created.

“VA may in its sole and absolute discretion choose to negotiate with any entrant to acquire a  license, use or convey any other intellectual property developed in connection with this contest.  Contestants, in order to be judged, will contribute the open APIs and any open source content in their entries to the Open Source Electronic Health Record Agent (OSEHRA).  Contestants will apply the Apache 2.0 license to the designated open source modules (including the interfaces between the contestant’s product and VistA) and contribute the modules to OSEHRA.[1]

Last year the VA also spend around $400k on some scheduling software as well and that doesn’t mean of course that it was installed and working when the crisis occurred it was not, common sense tells you there was not enough time to roll out anything new yet.

I had my own blog post about the scheduler issue and you can read it at the link below…now it’s a case of “who dunnit” for the FBI.  I wrote there as well that a new module was needed and when I wrote that I was not aware this contest had already produced a lot of potential replacements so give them a run for the $3 million spent and see if returned any results here with some useable code or complete

In addition here’s a potential HIE solution for integrating the VA and DOD worth reading too and it would work on any private hospital system too.  BD